If Egypt’s story is tragic, it is because it illustrates a global dynamic in the debt system that is rigged for the rich and against the rest.

This essay is part of the “Debt and Power” series of Progressive International’s Debt Justice Blueprint.

There is an enduring principle at the very center of the debt system — a principle that, despite its injustice, is taken entirely for granted by our politicians, pundits, and policymakers: the rich deserve better treatment simply because they are rich.

Such ‘regressive’ logic is the very foundational logic of finance. If you are a wealthy billionaire investor, you are more likely to be considered a safe borrower, and therefore offered the lowest available interest rate on your debt. If you are like the rest of us, borrowing to meet some basic need such as rent or food, then risk premiums will apply and lenders will charge you a much higher interest rate. This basic principle applies not only to questions of personal finance, but also to corporate and sovereign debt.

At the level of personal finance, consider payday loans: extremely short-term loans, mostly used to cover basic household expenses until payday arrives (hence the name), for which the lender charges extortionate interest rates, which in some cases reach more than 400 percent. For families living paycheck to paycheck, these loans can be a critical lifeline — until they snag families in endless cycles of monthly exploitation. Rich families, by contrast, can use their wealth and assets to avoid these traps, and lucratively so.

The same regressive principle applies to states: the more a country is struggling economically, the higher it will be charged for borrowing. There is a very clear negative correlation between how wealthy a country is and how much interest it is charged — a relationship that stretches all the way into negative rates, by which wealthy countries are effectively paid by creditors to take on loans, while their poorer neighbors are pushed into accepting higher and higher rates of interest.

This section traces the regressive dynamics of finance through the critical case study of Egypt. In doing so, it not only articulates the anti-poor bias that is built into the debt system, but by drawing our attention to this hidden principle, calls on progressive forces everywhere to transform it.

To begin, let us examine the government spending in Egypt over the past eight years. 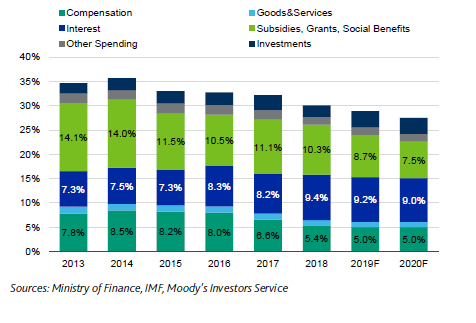 The three largest expenditures in the Egyptian state budget were: subsidies (including grants and social benefits), wages, and debt interest payments.

As the figure shows, the largest decline in Egyptian public expenditure was in subsidies, which nearly halved from 14.1 percent of GDP to 7.5 percent in less than a decade. The class character of this expenditure is clear: it constitutes the overwhelming majority of government spending for the poorest in the country. Its astounding reduction, therefore, affects the poor.

The second most significant change in government expenditure was spending on government wages, which fell from 7.8 percent to 5 percent of GDP. This spending is broadly directed to the middle class, of which a large proportion depends on employment in the government sector. Given the significant spending power of the middle classes in Egyptian society, the impact of a reduction in public sector jobs and wages is likely to have a deep and long-term impact on economic recovery — a depressive effect that is only compounded by the failure of the private sector to create sufficiently good job opportunities.

There is, however, one budget item that has actually grown: payments on Egypt’s sovereign debt. Over the course of this period, expenditure on debt payments has grown from 7.3 percent to 9 percent of GDP. It now accounts for about a third of all government spending, and forms the largest single government expenditure on record.

This is worth reiterating: the largest item of government expenditure — estimated at EGP 600 billion (about $40 billion) annually — is going directly into the pockets of banks and other financial institutions that have bought up Egyptian government debt.

In this way, the regressive nature of the sovereign debt system is related to the regressive nature of the tax structure. Egypt’s interest payments are paid from taxes. Tax ‘reform’ of recent years has clearly made the tax structure more regressive by increasing the share of consumption taxes (such as VAT) as a percentage of total tax revenues. For example, in FY 2018/19, the tax on goods and services amounted to 47.6 percent of the total tax revenue, up from 40 percent in FY 2015/16. This means that this gigantic tax-funded debt interest bill is mostly paid for by the poor, causing an upward transfer of wealth on a grand scale.

Egypt is, of course, not alone. In many countries around the world, tax structures are becoming more regressive as the debt burden becomes larger. The more that these two phenomena intensify, the more wealth is extracted from the poor and given over to the wealthy on a global scale.

But the regressive principle should not only concern us for reasons of its injustice. Even economists concerned only with overall levels of output should be outraged. The enormous profit from sovereign debt interest payments leads to a transfer of capital from wealth-creating productive activities that create jobs to wealth-extracting rentier activities. This in turn reduces the ability of the private sector to create jobs, coinciding with the decline in the government's spending on public sector employment. Given that the wealthy investor class is highly concentrated in the West, these flows of capital and funds do not only move upwards across class structures, but also spatially from poor countries to the wealthy financial centres of the world.

In short, the debt trap is global, dragging down the entire global economy as it lines the pockets of Northern rentiers.

Back in Egypt, the consequences of the debt trap reach far beyond economic measures of wealth and poverty. On the contrary, Egypt’s regressive financial regime undermined the monetary measures put in place to mitigate the impacts of the Covid-19 pandemic. Two of the key debt-related measures designed by the Central Bank to help Egyptians navigate through the economic crisis were to cut interest rates by 300 basis points (3 percent) and reschedule credit payments.

In Egypt, only 32.8 percent of those over 15 years of age have bank accounts. This number declines significantly if we only consider those who have effective access to financial services (cheap loans, mortgage, lucrative financial investments, etc.). In other words, only a small percentage of individuals and businesses can benefit from the Central Bank of Egypt’s mitigation measures — individuals that already benefited from considerable access and privilege.

The poor, meanwhile, were largely excluded from the government’s economic measures. Debtors of microcredit could not benefit from the rescheduling of credit payments because their creditors were not technically designated as banks, and therefore not subject to the Central Bank’s decision!

The Egyptian government responded by claiming that it would offer the poor fiscal support instead of monetary support. One of the key measures was to extend monthly allowances of $30 a month for three months to informal workers. By some measures, informal labour constitutes up to 70 percent of total labour in Egypt. The number of informal workers grew significantly in the last decades as a result of decades-long sustained neoliberal offence on the public sector and social protection. The measures were intended to reach this large proportion of the Egyptian population otherwise locked out of the monetary measures by the Central Bank.

However, this meagre support was far from effective in relieving the pain of Egypt’s poorest families. A recent government study revealed the true cost of the pandemic on the poorest. It showed that half of the families who have suffered a decline in their income due to Covid-19 borrowed from friends and family to make up for the loss. About 17 percent of these families have depended on charity; meanwhile only 5.4 percent of the affected families have received the government allowance. It was clear by the government’s own measures that those most negatively affected were the poorest. According to the same study, the incomes of only 48 percent of university degree holders were affected by the pandemic, while for illiterate members of the population (who make up a quarter of the population among the very poorest sectors of society), the income of a whopping 85 percent was affected.

Out of the Global Debt Trap

This section has focused on the case of Egypt to illustrate a global dynamic in the debt system that is rigged for the rich against the rest. The regressive principle, we have seen, runs all the way through the international financial system, from the level of sovereigns down to the level of the individual household. And through this analysis, we have seen how the global financial system creates an upward flow of wealth from the world’s poorest communities to its richest individuals. To deliver debt justice, then, is to break out of this cycle, and redirect that flow of wealth across the global economy, re-rigging against the rentiers and for the families in greatest need.

Osama Diab is a member of the Progressive International Debt Justice Collective. He is an economic rights researcher and a lecturer in development studies.

From the Blueprint team at Progressive International

We live in a world of debt. The depth and breadth of global “debtification” is difficult to overstate. It is the primary contention of this collection that all these disparate dynamics — hedge funds raking in pandemic profits, students struggling to afford an education, micro-borrowers on the brink of bankruptcy — are different manifestations of the same basic structural mechanism at the heart of the global financial system: the endless cycle of privatized gains and socialized losses. Simply put, the rich get richer, while the poor, by design, remain poor.

The goal of this Collective is the goal of progressive movements around the world, to end that cycle. Read the full Debt Justice Blueprint here. If you’re interested in engaging with us, please write to the Varsha Gandikota-Nellutla, Blueprint Coordinator at [email protected]

As countries scramble to deal with the pandemic, indebtedness is only likely to increase — and with it, inequality. How can we build a world without these global debt inequalities?
Blueprint

For the lenders, these debts are legally the debts of the peoples of the South. This must be contested.
Blueprint

If Egypt’s story is tragic, it is because it illustrates a global dynamic in the debt system that is rigged for the rich and against the rest.
Support the movement
Become a memberMake a donation
Follow us
FacebookTwitterInstagramYoutube
Receive the Progressive International briefing
Progressive
International
Privacy PolicyManage CookiesContribution Settings
Site and identity: Common Knowledge & Robbie Blundell