As countries scramble to deal with the pandemic, indebtedness is only likely to increase — and with it, inequality. How can we build a world without these global debt inequalities?

This essay is part of the series “A Vision of Debt Justice” of Progressive International’s Debt Justice Blueprint.

Debt has historically been central to the struggle for international and intersectional justice. The unequal and exploitative experiences of debt have become more pervasive over the past decades, and COVID-19 has only exacerbated the inequalities and injustices associated with debt. As more and more individuals, communities, and countries are drawn into debt relationships, it is evident that both across and within countries, there is great inequality in access to debt and the terms on which it is available, which adds to other economic inequality. Therefore, unpacking and challenging the inequalities inherent in these becomes key for any progressive international economic justice movement. Meanwhile, any strategy to address these inequalities must recognize the enduring and extractive nature of capitalism, and how it interacts with colonialism and imperialism.

National debt globally, after growing by $10 trillion in 2019 to $255 trillion, rose by another $14 trillion just between January and mid-May 2020.1 Besides the growing debt levels, one of the foundational problems with debt in the contemporary global economy is the way the global financial system is structured, which makes it particularly difficult to organize an effective response. Thus far, the IMF response to debt crises unfolding across the world has been wanting, to say the least, and often contributing to a worsening of the situation.2 The call by UNCTAD3 to establish an international body to oversee developing country debt relief programs in the wake of COVID-19 has not received support from advanced countries.

Beyond national-level debt, both corporate and household debt have also surged in recent years, but with unequal outcomes across geography, class, race, and gender lines.

The contemporary structuring of global production reproduces historical relations of dependence, which forces fiscally constrained developing countries to accumulate debt, contracted on terms that are typically much more costly than for governments in advanced economies. Recurring debt crises in the Global South can, in that light, be seen as a symptom of uneven development, rather than the cause. However, despite developing countries’ structural need to borrow more than many advanced countries, the terms and conditions at which they borrow tend to not be in their favor.

In addition, governments across the world are being forced to underwrite or guarantee private debt, with adverse fiscal implications. External debt, especially private external debt, has been rising since 2008. There was a sharp increase in debt in the wake of the Global Financial Crisis (GFC), and again in the wake of the global pandemic. As Figure 1 shows, by the end of 2018, external debt to GDP ratios were significantly higher than in 2008 in Europe and Central Asia, Latin America and Sub-Saharan Africa. Only in East Asia and the Pacific and the Middle East and North Africa were debt levels marginally above or below those in 2008. Even low-income countries whose external debt stock had fallen from $88 billion in 2000 to $83 billion in 2008 (partly because of debt write-offs under the HIPC initiative) , external debt more than doubled thereafter, to $173 billion in 2018. 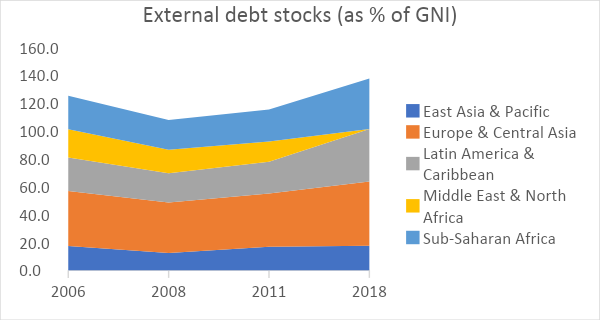 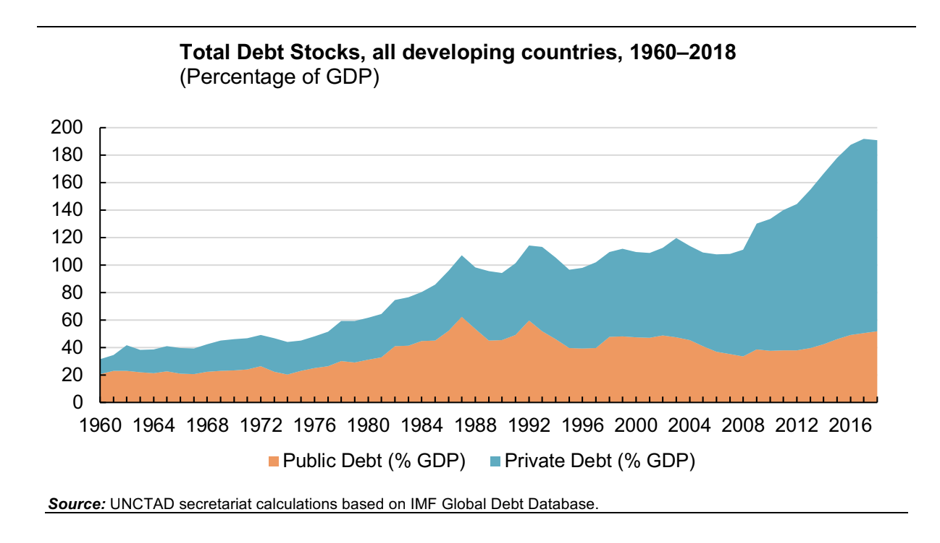 Source: UNCTAD. 2020. From The Great Lockdown to the Great Meltdown: Developing Country Debt in the Time of Covid-19

As Figure 2 demonstrates, while both public and private debt has increased, the increase of private debt has been more drastic, from 83 per cent in March 2008 to 138 per cent of GDP in 2018 (versus 36 per cent of GDP to 48 per cent for public debt). These changes are unevenly distributed, with the rise in emerging market debt being largely driven by borrowing by the private non-financial sector. In low-income countries, on the other hand, external debt tends to be predominantly sovereign debt, with a stable share of around 80% since 2006. Even with private debt, there is a danger that when repayments become difficult, liabilities are taken over by sovereigns in a bid to preserve or restore “investor confidence” and often at the insistence of the IMF. Therefore, the growing shares of private borrowers do not reduce the risks to sovereigns.

See Debt Data Portal's map of countries4 by the risk they face of entering a debt crisis, produced by Jubilee Debt Campaign. A debt crisis is where debt payments undermine a country’s economy and/or the ability of its government to protect the basic economic and social rights of its citizens. Debt crises can be caused by debt owed by governments, or by debts owed by the private sector, ie, businesses, banks and households.

As noted earlier, developing countries still have to pay more than advanced countries to borrow on international capital markets, thus cementing global debt inequalities. This situation has been particularly dire for African countries, also in the wake of the pandemic.5 Further, even fiscal responses have varied because of different approaches to monetary policy across advanced and developing economies. The absence of generous central bank lending in developing countries, which, in contrast, is common in advanced economies, is a key aspect of the global debt inequality.

Beyond the inequalities in external sovereign debt, developing countries also face difficulties and higher costs when borrowing in domestic currency,6 and firms in developing countries pay more7 to access finance8 than firms in advanced economies, adding to structural inequalities. They also face vulnerabilities associated with the vicissitudes of international finance, specifically in the form of volatile cross-border capital flows of all kinds.

In addition to the global financial system generating inequalities at the sovereign and corporate level, through various ‘financial inclusion’ initiatives, many households and individuals have also been pulled into an exploitative system of debt. In the US context, rising household debt, driven by stagnating real wages and financial deregulation,9 was one of the triggers behind the global financial crisis in 2008.

While there is a need for better functioning of credit markets in developing economies, as well as for people living in poverty in advanced economies, the way that microfinance and financial inclusion initiatives have been rolled out thus far have had variegated effects, in some instances10 leading to crises11 of indebtedness. This is in part because access to credit on its own cannot resolve issues of poverty and deprivation, and in part because microfinance tends to be associated with very high lending rates. In Kenya, the heart of mobile money, evidence suggests that M-Pesa has exacerbated existing inequalities,12 including along gendered lines. In the US, there is ample evidence to demonstrate that there is discrimination in access and affordability of credit along racial lines.13

COVID-19 has already resulted in increased indebtedness and inequality in terms of debt relationships. What’s more, indebtedness is likely to further increase as the financing needs of developing countries will increase as countries move from managing the pandemic to addressing the economic and social consequences of lockdowns.

Jayati Ghosh is professor of economics at the University of Massachusetts at Amherst.

Ingrid Harvold Kvangraven is a Lecturer in International Development at the University of York. Her research areas include development finance, structural features of underdevelopment, and critically assessing the economics field.

From the Blueprint team at Progressive International

We live in a world of debt. The depth and breadth of global “debtification” is difficult to overstate. It is the primary contention of this collection that all these disparate dynamics — hedge funds raking in pandemic profits, students struggling to afford an education, micro-borrowers on the brink of bankruptcy — are different manifestations of the same basic structural mechanism at the heart of the global financial system: the endless cycle of privatized gains and socialized losses. Simply put, the rich get richer, while the poor, by design, remain poor.

The goal of this Collective is the goal of progressive movements around the world, to end that cycle. Read the full Debt Justice Blueprint here. If you’re interested in engaging with us, please write to Varsha Gandikota-Nellutla at [email protected].

As countries scramble to deal with the pandemic, indebtedness is only likely to increase — and with it, inequality. How can we build a world without these global debt inequalities?
Blueprint

For the lenders, these debts are legally the debts of the peoples of the South. This must be contested.
Blueprint

If Egypt’s story is tragic, it is because it illustrates a global dynamic in the debt system that is rigged for the rich and against the rest.
Support the movement
Become a memberMake a donation
Follow us
FacebookTwitterInstagramYoutube
Receive the Progressive International briefing
Progressive
International
Privacy PolicyManage CookiesContribution Settings
Site and identity: Common Knowledge & Robbie Blundell