Not only is the island combating the virus at home, with over 1,800 confirmed cases, 70 deaths and 1,000 patients under observation as of mid-May. It is also sending teams of nurses and doctors to support foreign health services overwhelmed by the scale of the crisis. Cuban medical brigades are fighting coronavirus in 21 countries, including Italy, Jamaica, Andorra, Belize, Angola and South Africa — in addition to the 28,000 Cuban health professionals who were already present in 65 countries.

This act of global solidarity was recognised by Jeremy Corbyn MP when he stated in UK parliament: “The internationalism of the doctors from Cuba who have gone to fight the virus in Italy is inspirational."

In Cuba itself, doctors and medical students throughout the country are taking part in door-to-door health check-ups, reminding people of relevant symptoms, and imploring them to stay at home.

Cuba’s response at home and abroad is possible due to its health system, initially modelled on Britain’s NHS, with a particular emphasis on prevention. Family doctors are the foundation of this model. The island can boast of the highest doctor-to-patient ratios in the world: over eight for every 1,000 citizens - more than double the rate in the US and in the UK. Living within the communities they serve, Cuban doctors and nurses know exactly who the most vulnerable are and can monitor them closely, a factor which has helped keep Cuba’s infection numbers down during the Covid-19 pandemic.

The island’s altruistic response to the global emergency continues a long history of Cuban humanitarianism. In the last 56 years, 400,000 Cuban health workers have responded to natural disasters and helped build health services in 164 nations. This includes sending medical brigades to Pakistan in the aftermath of the Kashmiri earthquake (2005), to Haiti to assist with a devastating cholera outbreak (2010), and to West Africa in the region’s fight against Ebola (2015).

Cuba has also trained 35,613 health professionals from 138 countries at its Latin American Medical School since 1998. During a visit to the school, Dr Margaret Chan, Director-General of the World Health Organization said, “I know of no other medical school that offers students so much, at no charge. I know of no other medical school with an admissions policy that gives first priority to candidates who come from poor communities and know, first-hand, what it means to live without access to essential medical care. For once, if you are poor, female, or from an indigenous population you have a distinct advantage. This is an institutional ethic that makes this medical school unique.”

Cuba’s international humanitarian response comes despite the effects of the 58-year old criminal United States blockade — the economic impact of which has been exacerbated by Donald Trump in recent months, causing daily shortages of food, fuel and other basic necessities. Last year, the cost to the Cuban health sector alone amounted to more than $104 million, preventing the island from obtaining crucial medical equipment — particularly in tertiary care, and US-produced medications. 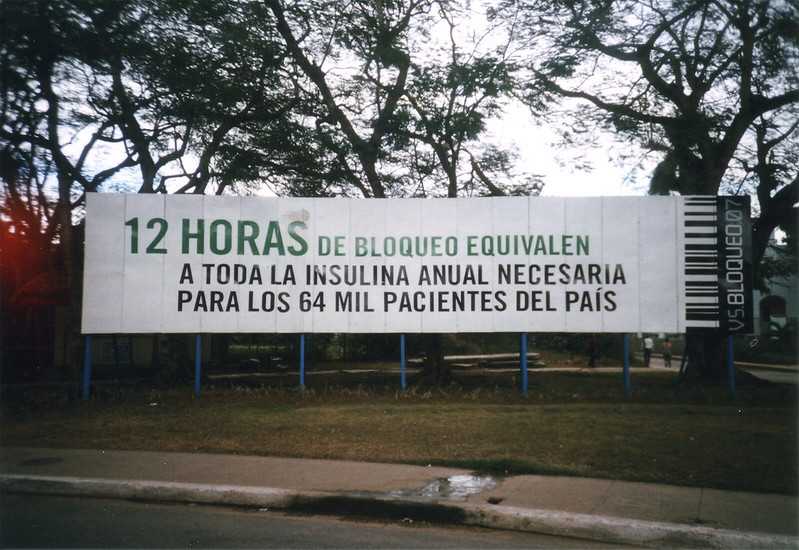 Even in the face of a global crisis, the US government still finds time to attack Cuba, issuing a series of tweets in late March warning countries against accepting support from Cuban medical brigades. US sanctions also prevented the shipment of a container of Chinese medical aid including testing kits and ventilators from reaching the island in April.

At this time of international crisis, the US blockade is criminal not only for its impact on the Cuban people, but also for hindering their ability to assist in the worldwide battle against the virus. This is why the Cuba Solidarity Campaign launched an international call for the US blockade to be suspended.

An open letter to the British government calling on them to make an urgent representation to the US to end its blockade immediately, or at the very least to temporarily suspend it to allow vital supplies of food, fuel and medical equipment to the Cuban people had been signed by more than 16,000 in May. The strength of feeling and support for Cuba’s international brigades and opposition to the US blockade was clearly demonstrated. Messages flooded in from across the globe with more than 130 countries represented. An appeal for emergency medical aid for the island also raised more than £25,000 in a matter of days and 51 British MPs wrote to government calling on them to speak to their US counterparts.

If the blockade was lifted, Cuba’s health achievements would be even more impressive. If the Global South could replicate Cuba’s achievements, hundreds of millions of lives could be saved each year.