In response to the imposition of a new police curfew in Serbia, citizens began gathering in front of the National Assembly, while respecting measures such as wearing protective masks. They came to protest the government’s failed response to the Coronavirus Crisis, but also its consistent lies to the public about the status of the pandemic in order to defend political interests. 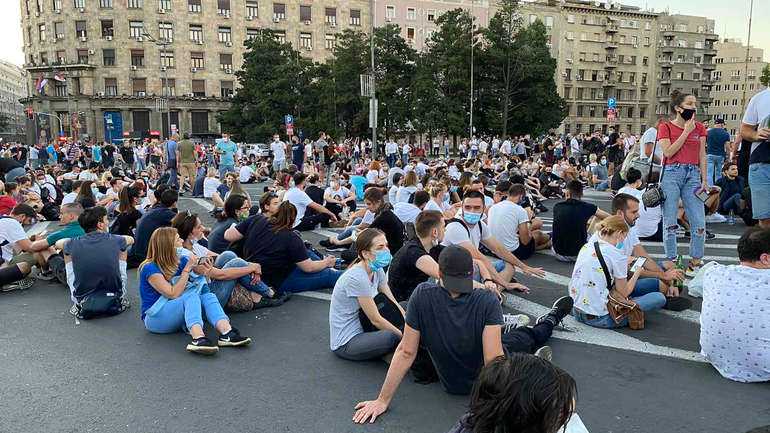 These interests were centered around the national elections on 21 June — an election held in the midst of a pandemic, under the false pretenses that Vučić had successfully contained the virus in Serbia. The misinformation came as no surprise: Serbia is widely recognized as a hybrid political regime, where elections fail to meet basic democratic requirements. Nonetheless, the brazenly authoritarian and, in the context of the pandemic, outright murderous behavior of the government has sparked a major backlash.

People in Serbia are dying as a consequence of the government's irresponsibility. Hospital capacities are reaching their limits, numbers of COVID-19 patients are growing, protective equipment is in short supply, and doctors and nurses are getting infected. We are now in the seventh month of the pandemic and, due to the electoral campaign, Covid-19 is now spreading fast across towns in Serbia with even less medical capacity than in its cities.

These failures have eroded trust in a public system that was already in steep decline — a system that Vučić has used to crack down on citizen dissent: from mid-March to mid-May, the government announced a "state of emergency", imposing curfews for all citizens and restriction for elder citizens to leave their homes. Such restrictions were lifted suddenly last month, in service of pretending that we were “back to normal” before the elections on 21 June. For instance, even gates of football stadiums were open for fans to watch football games, and public rallies were of course permitted, too. Meanwhile, a recent investigation found that the government had been lying about the number of confirmed COVID-19 cases and the number of people that unfortunately died from COVID-19 in the previous four months. They wanted to show themselves as successful in protecting citizens in order to obtain support in the elections.

Now, citizens are rising up against the government. Cries such as “Father, this is for you!”, a reference to a protestor’s father who died due to Covid-19, can be heard as they march. In response, the government has cracked down — violently and brutally. The streets of Belgrade became a warzone for its citizens, in which uniformed police and police officers in plain clothes are beating citizens and throwing enormous amounts of tear gas, while fascists and thugs were infiltrated to induce even more violence.

Unfortunately, instead of a responsible government that admits its mistakes, citizens of Serbia are dealing with an undemocratic government that lies and spreads false accusations, such as the one by the President of Serbia and the Ministry of Interior that citizens have thrown tear gas on police officials, instead.

We will keep fighting here in Serbia, both against the autocratic regime and against the fascists. Your solidarity will be key to our victory.

In prisons across Sierra Leone, women are detained because they owe debt.
Statements

Anti-imperialism must be at the centre of the fight for debt justice.
Statements

Pistor: An Alternative to Our Debt-Ridden System