‘OUR REAL ISSUE IS ABOUT FREEDOM’

The students explained that Melih Bulu was appointed in defiance of any democratic practices, and they demanded Bulu to resign immediately. The students gathered in front of the campus and made their press statement: “We do not accept this appointment. Again, with a decision taken during a midnight, we suddenly found ourselves in this situation. The universities are idea-factories. This appointment, made in defiance of the will and the freedom of the university community, is a completely political move. We have to tell that such antidemocratic practices harm our university. It is essentially important that the universities are not political tools of some persons or institutions. The people in charge such as the rector, the deans, the department heads must win their places with elections, not with appointments. The real issue of ours, the Bogazici University Community, is the matter of academic freedom. And the answer to tackle this matter is achieved by the university community itself. We do not accept this intervention against the decision making mechanism of our university.”

The students claimed for the withdrawal of the appointments of rectors to all universities, and they declared to continue their fight until this decision of withdrawal. 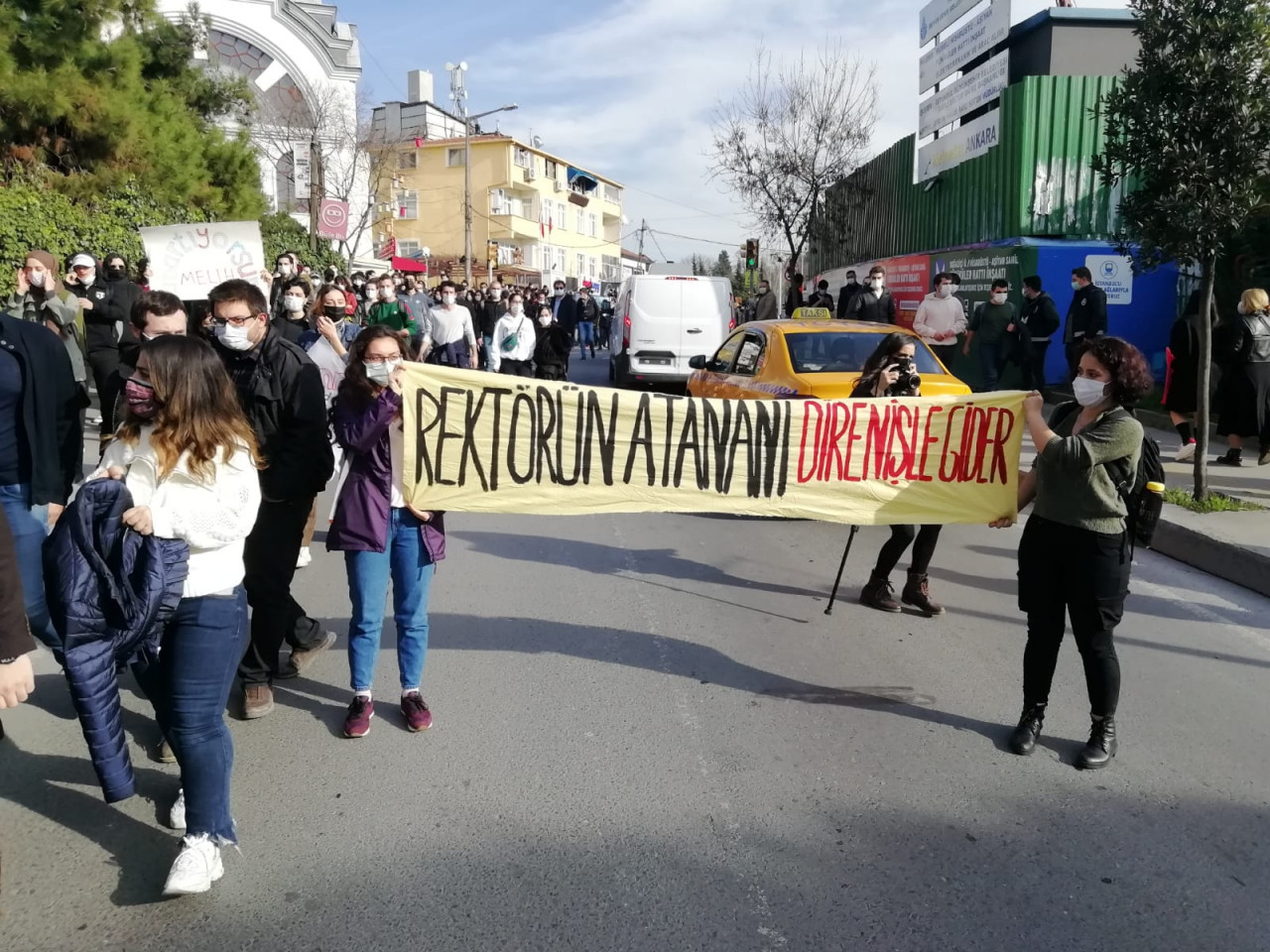 STUDENTS FROM OTHER UNIVERSITIES UNITE WITH BOGAZICI STUDENTS: OUR RESPONSE WILL BE STRAIGHT

Lots of students from METU, Istanbul Uni and many others showed their support for the demonstrations of Bogazici students. The METU students said, “They are afraid of the voices of the students, but we are not. Some day, this darkness will come to an end. The appointed rectors will draw away, but we will persist.”

The students from Marmara University showed their support with these words: “They are afraid of our solidarity. The main way to force these decisions back is our solidarity and unity.”

In their declaration, the students from Istanbul Technical University stated, “We greet these demonstrations, we are with you! This fight is the fight of the youth. It is not only the youth, but also the whole workers. As an aftermath to today’s solidarity, not only the appointed rectors but also some other people will lose their seats.”

The students from Yildiz Technical University stated, “Our response against this appointment to Bogazici University will be sharp and clear.”

The complete declaration of the Bogazici students is as follows:

“As done in 2016, with a bolt-from-the-blue decision taken during a midnight, we confront the situation of an appointed rector. Until 2016, our university elected its own rector with democratic elections, which had been an important part of our societal culture. Nonetheless, after 2016, anti-democratically appointed trustee rectors started to get in charge. Even further, it is the first time for an academic outside of the Bogazici Community to be appointed as a rector, since the 1980s military regime era. This is yet another instance of the anti-democratic practices that have cancelled the rectorate elections since 2016. 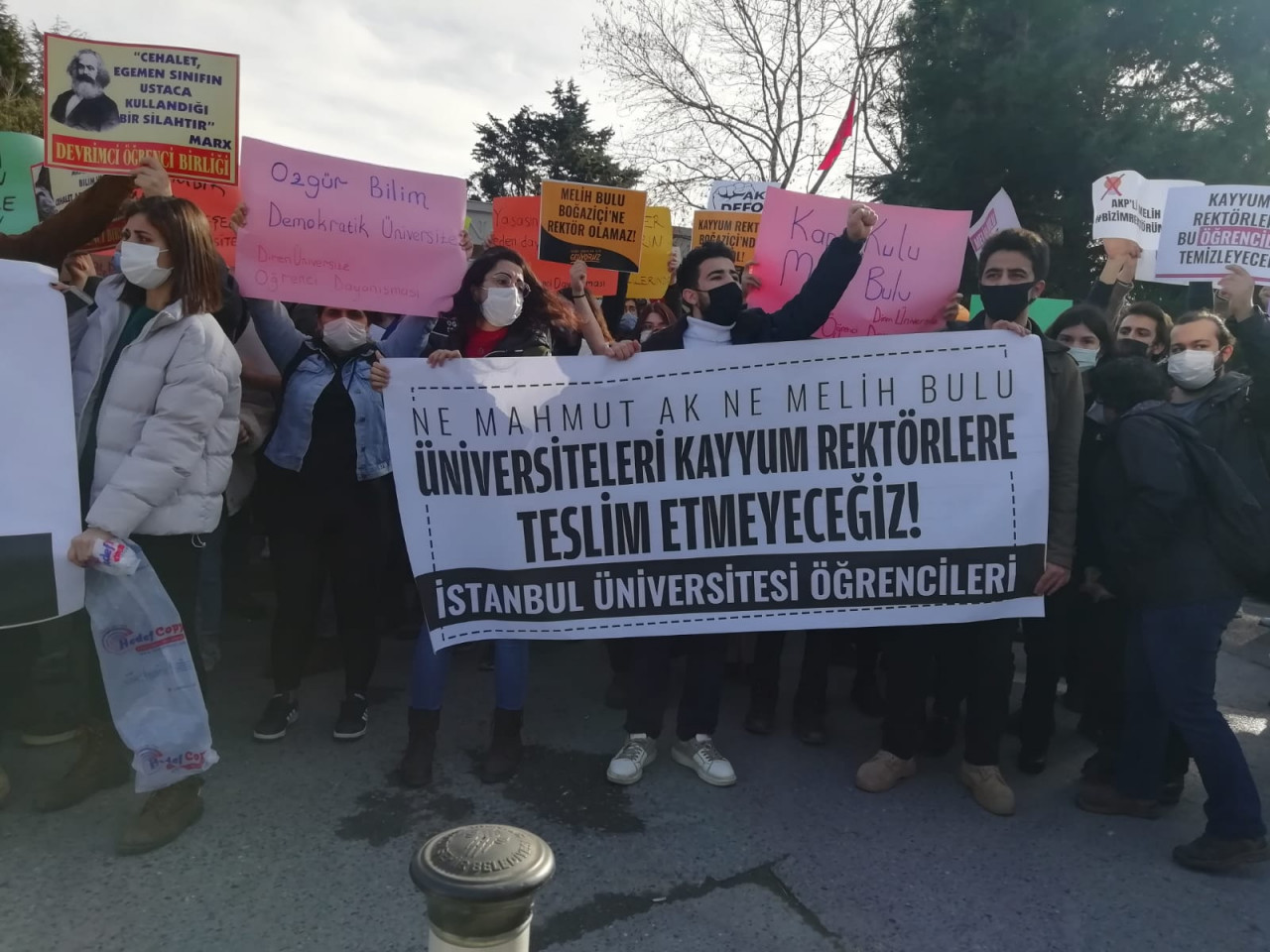 Universities are the factories of ideas and science in our countries. They are crown jewels when it comes to free thought.

And academic autonomy is a necessity for the sustainability of those institutions. The academy is superior to the ideologies and the politics. However, this appointment, made in defiance of the will and the freedom of the university community, is a completely political move. We, as the Bogazici students, by virtue of the principals and the elements of our university, defend that the autonomy of our university be achieved by holding a democratic rector election, which is run completely by the university members; instead of an academic appointed out of the sky, regardless of their personality and their background. Heartbreakingly, we observe that the antidemocratic practices harm our university. In order to minimize the damages, we would like to repeat our commitment with the Academic Principles, approved by the University Senate in 2012:

As the members of the Bogazici Community, our main issue is beyond the academic background and the personal stance of Melih Bulu. The issue is about academic autonomy, intellectual liberty and a democracy above the personalities. And the solution to this issue is determination of the university related decisions, by the university itself. That is why, we once again state:

We do not accept this intervention against the autonomous decision making mechanism, the democratic principles, the freedom of thought of our university. We do not want a trustee rector and we do not back away.

Our demands are as follows:

We do not accept, we do not back away!

This is a shortened version of the original article on Duvar.