At the same time, on the other side of the world, the North Vietnamese Army (NVA) and National Liberation Front (NLF) were bearing down on Saigon, which finally fell to communist forces a month later, marking the end of a long and brutal struggle by the Vietnamese people for independence. Women, and the essential roles they played in the Vietnamese independence movement, were often depicted by war artists, who risked their lives to practice art on the frontline through these times.

Portraits of Vietnamese women at war was a recurring theme in the art of Vietnamese artists from the war years. Most were embedded within the Viet Minh, the NLF, or the NVA. Some were commissioned artists, there to record heroic deeds and victories, and produce propaganda to support the resistance efforts and to help maintain morale. Others were amateur artist-soldiers who documented their personal war-time experiences and friendships and found solace through art when free from action. They all carried their art materials on their backs, and many made the long, arduous and dangerous trek down the Truong Son, or Ho Chi Minh Trail, to the South. They created their art in and around the battlefield frontlines. The portraits and depictions of women these works include help bring greater recognition to this extraordinary period of time when so many young artists took to the field to draw and paint, and especially to pay homage to the “Long-Haired Army”, the resolute women of Vietnam.

This art helps us see Vietnam as more than a mere theatre of war so commonly portrayed in western cinema. The courage, fortitude and determination of the women revealed through this wartime art provides a new perspective on how Vietnam repelled its unwelcome visitors. Stories abound of women resisting Japanese occupation of Vietnam during the Second World War, of women helping to repel the French colonial powers up to their decisive defeat in 1954, and later of women’s contributions during the American (or Vietnam) war as combatants, guerrillas, scouts, spies and informants, and as labourers maintaining military supply routes delivering weapons, ammunition, food and medical supplies to the frontlines.

The leadership of women in the fight against the twin forces of colonialism and capitalism are not just being recognized today: they have been embraced as an integral piece of the revolutionary struggle since its beginnings. President Ho Chi Minh recognized women’s contribution in his declaration of independence in Hanoi in 1945. Adapting Thomas Jefferson’s words, the Vietnamese leader emphasized inclusion of all his fellow compatriots, women and minorities, in his opening phrase “… All people are created equal, they are endowed by their creator with certain unalienable rights, amongst these are life, liberty and the pursuit of happiness”.

The creation of the National Liberation Front (1960-1975) saw women again leading men into battle and fighting both in exclusively female units and alongside men amongst the rank and file. Nguyen Thi Dinh rose to the rank of general and was second in command of the NLF and under whom both male and female officers and soldiers served. In the field of political leadership, Madame Nguyen Thi Binh was handpicked from within the NLF by Ho Chi Minh for the Vietnamese negotiating team at the Paris Peace Accords in 1968 to represent Vietnam’s case for independence on the international stage.

A larger exhibition of portraits of Vietnamese women at war from the Frontline Collection was exhibited at the National Museum of Fine Arts in Hanoi in May 2017. The works are testimony to the participation of women in virtually all aspects of the wars, guerrilla activity against French occupation and colonialism, the defeat of the French army at Dien Bien Phu, followed by the war with the USA and its allies during the long struggle for national unity and independence that raged for a quarter of the 20th century.

Most works were created in the battlefield, others inspired by field sketches, but often under the most challenging circumstances. The artists usually travelled and lived with soldiers, sharing in the daily dangers and deprivations that endured during the war. Some of the works from the full collection are shared here to coincide with International Women’s Day and its theme of Women in Leadership.

Images courtesy of the Frontline Collection. 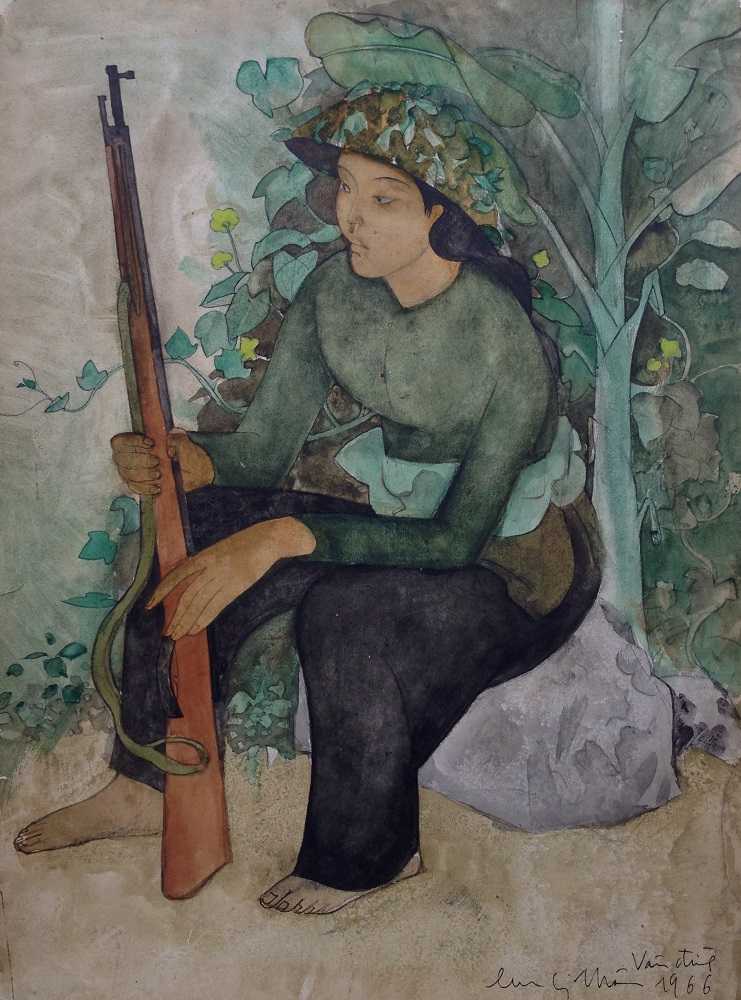 Luu Cong Nhan (b.1930 d.2007) had studied in the revolutionary regional stronghold in Viet Bac where an impromptu art school was established prior to 1954, under the renowned Vietnamese artist To Ngoc Van. Included here is a beautiful watercolor by him from 1966, of a militia woman resting on a rock in the forest. 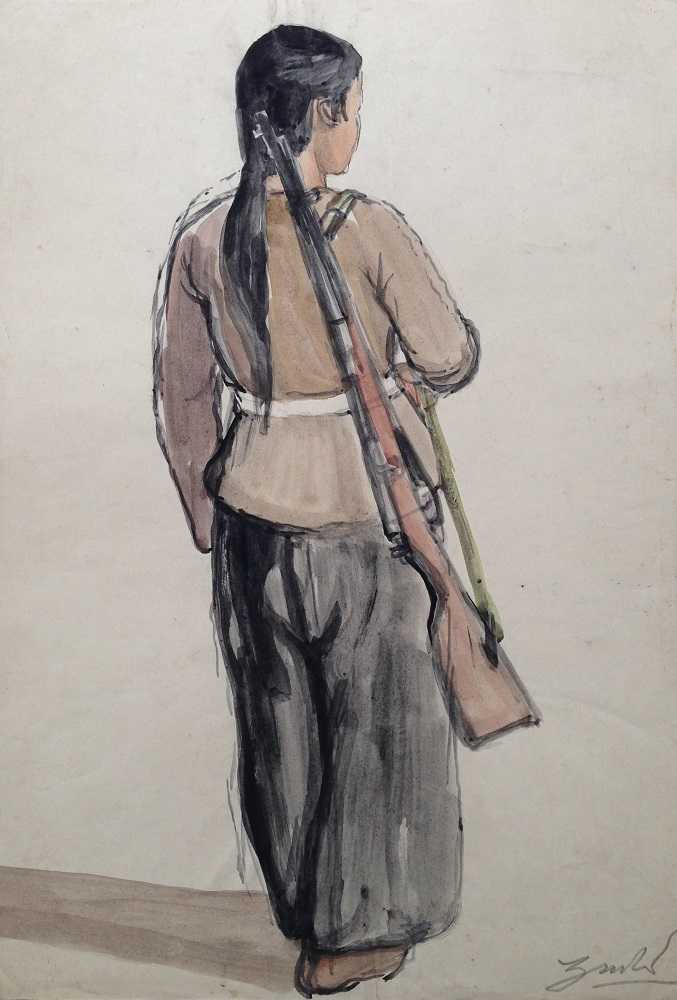 Trinh Kim Vinh (b.1932) is notable for her depiction of women in particular in her art. She experienced an arduous five-month trek down the Truong Son in the early period of the American war and was a featured artist in an exhibition with accompanying book entitled ‘As Seen By Both Sides’ that toured the USA in 1991. She produced some wonderful lithographs during a period in East Germany after graduating from the Hanoi College of Fine Arts, as well as portraits in watercolour from the frontline. 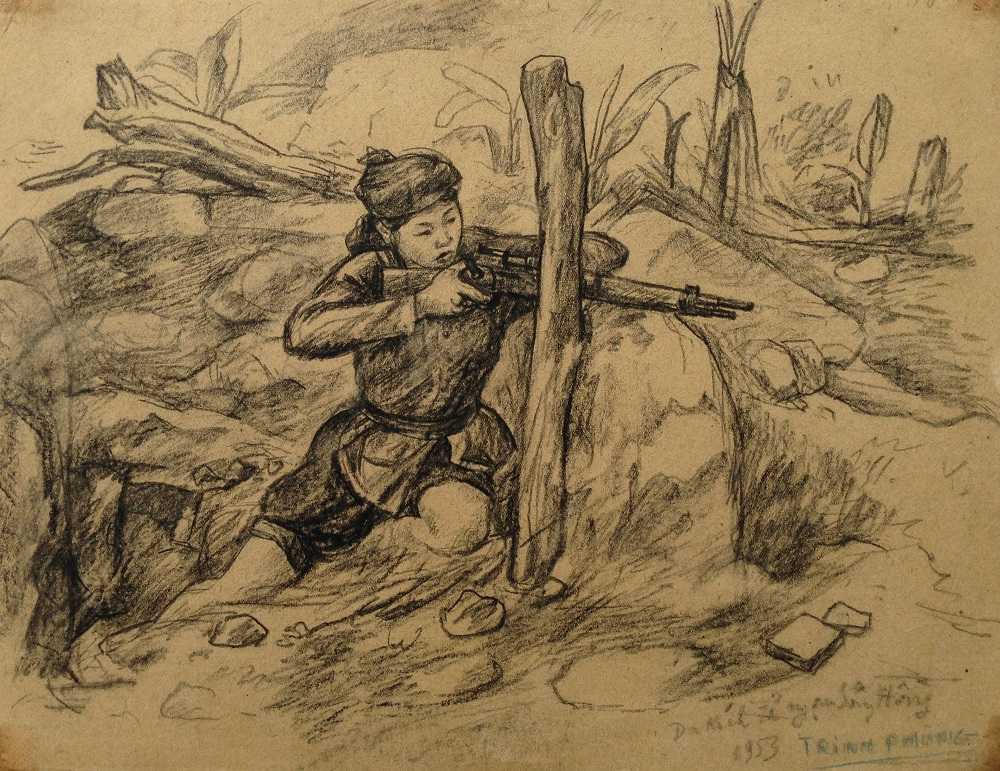 Her brother Trinh Phong (b.1922) is another notable and awarded artist, many of whose works are held in the Vietnam Fine Arts Museum, museums in Russia, and in private collections around the world. Included from the Frontline Collection is an early, remarkable charcoal pencil sketch of a female guerrilla of the Viet Minh resistance against the French, on the frontline in the mud flats of the Red River in the early 1950s. Her headwear is fastened in a traditional style that was favoured by women in Northern Vietnam. 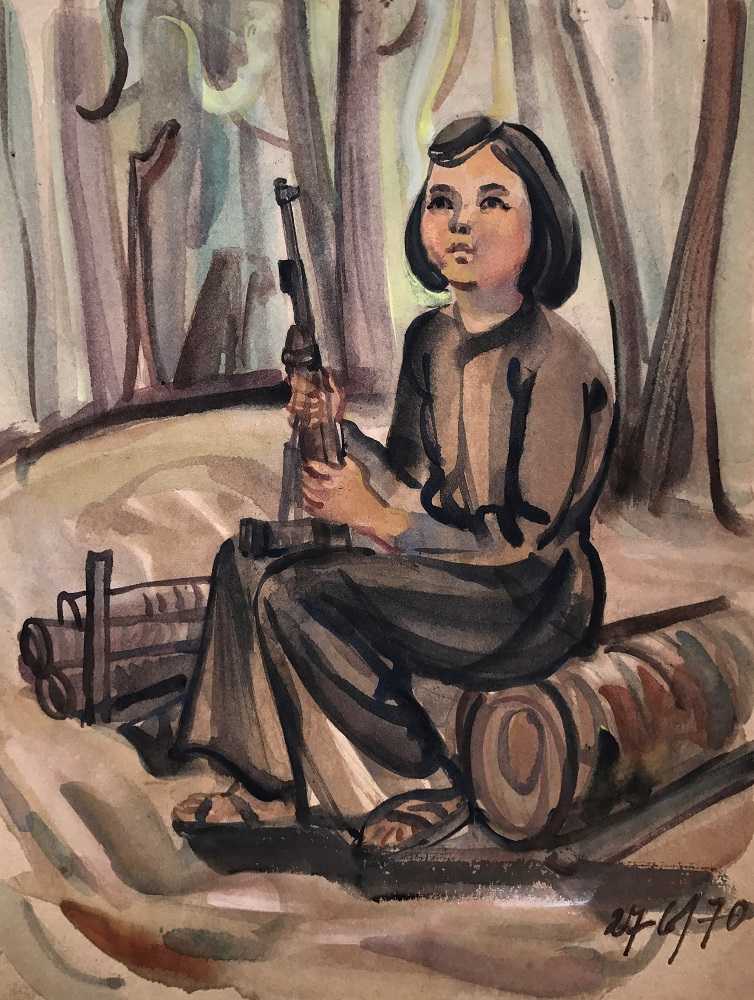 Nguyen Thanh Chau (b.1939 d.2012) studied art for a few years in the Soviet Union in the early sixties, before returning to Vietnam and joining the Ho Chi Minh Campaign that led to the overthrow of Saigon. He was a prolific artist who managed to preserve much of his work from the war years and whose sketches have been widely collected and exhibited internationally. His work here is represented by a watercolour of a young female member of the militia, seated under a canopy of trees. 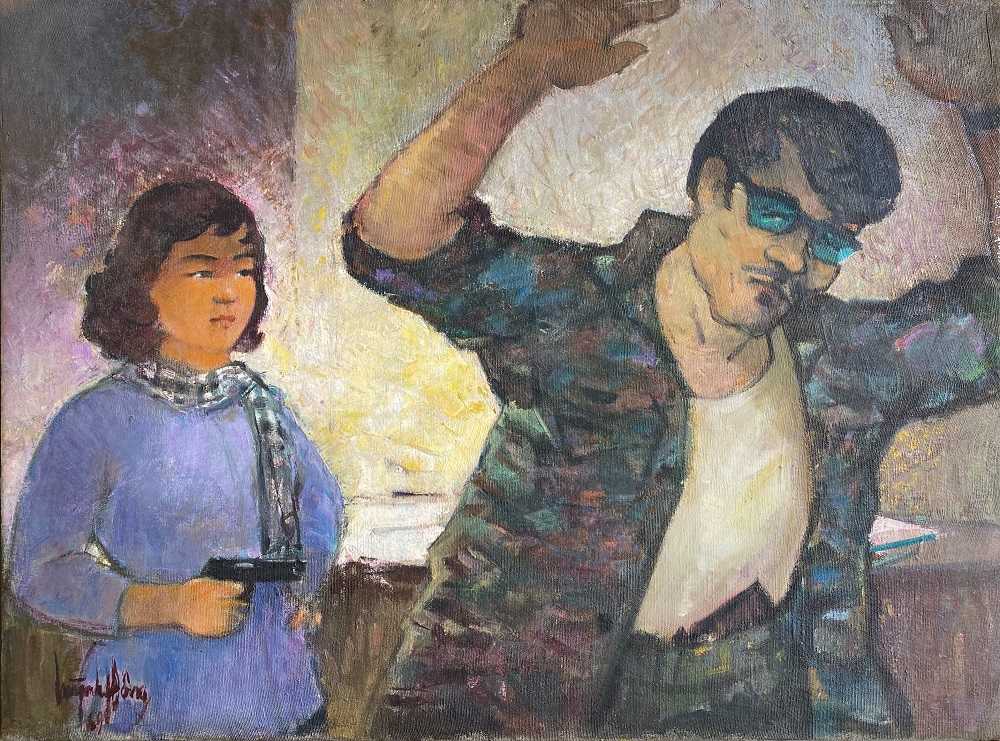 Huynh Phuong Dong (b.1925 d.2016), like most of the artists, often drew or painted literally in the midst of the battlefield action. He experienced and survived some 80 plus bombing raids, including some fearsome B52 strikes. Here we have reproduced a studio oil from the Frontline Collection, painted in 1969 depicting the legendary, smiling young assassin, Vo Thi Thang in action. She was a heroine of the NLF cause, an idol for many as she was always depicted smiling confidently. Condemned to twenty years of imprisonment on the notorious Con Dao, she replied, smiling “your government will not last that long”. 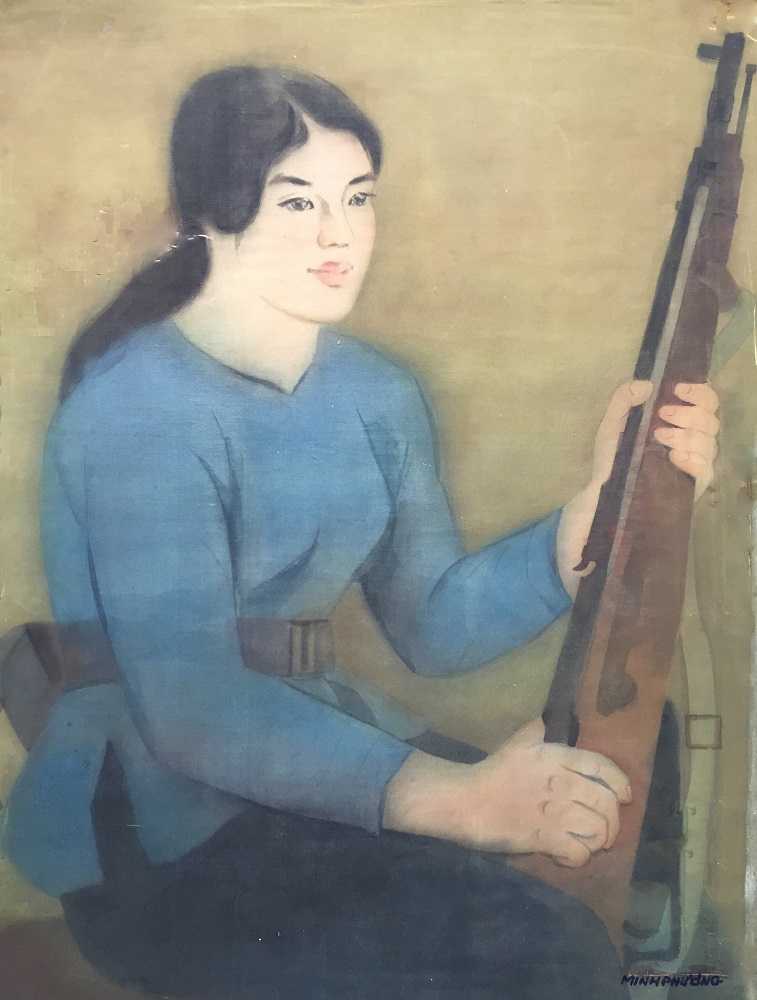 Minh Phuong (b.1943) is another important female artist amongst a generation of resistance artists. She is best known for her propaganda works, and for her skillful silk painting technique, an example of which is shown here depicting a member of the “long-haired army” from 1967. 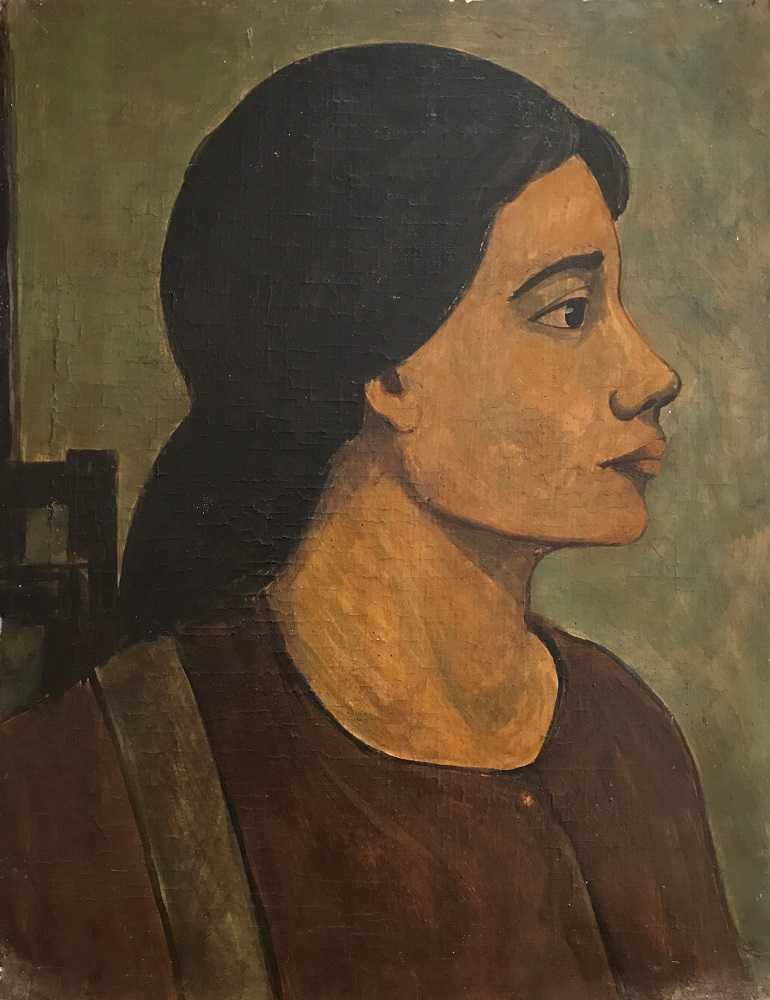 Loi Hoan Trang (b.1935) commenced his revolutionary activities at a very young age, before returning to a life of teaching art after two periods studying in Moscow. Perhaps best known for his monumental murals, his oil painting portrait illustrated here powerfully depicts the determination and strength of Vietnamese women. 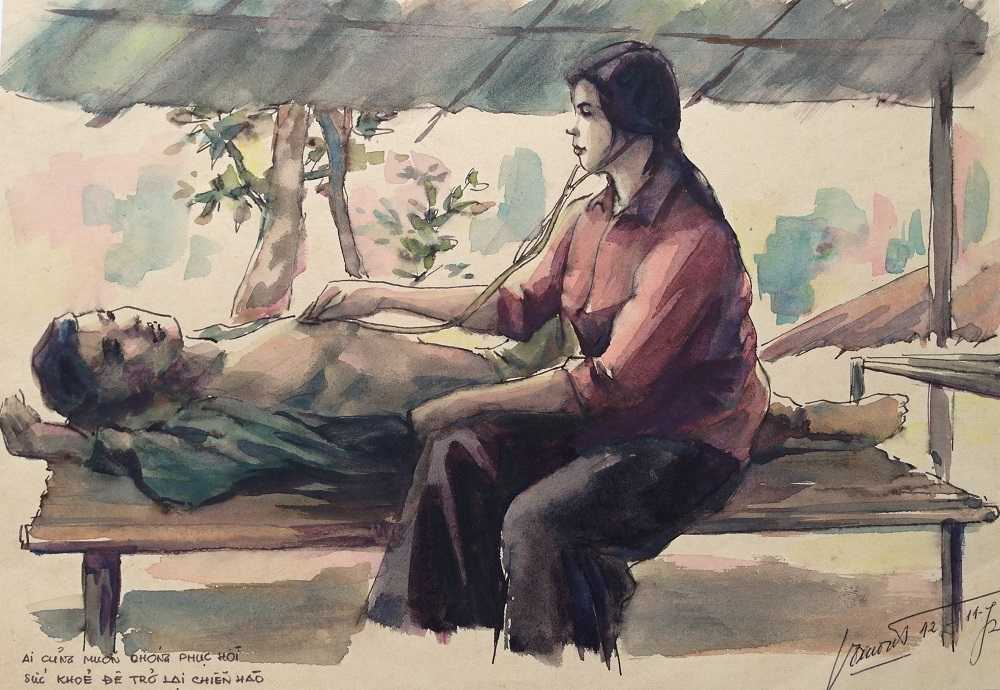 Finally, Vo Xuong (b.1942) is another of the younger generation of artists profiled here. He was a self-taught artist-soldier whose watercolours often display a distinctive, colourful style and who remained a prolific propaganda artist until the age of photoshop. Here we have shared one of his more subtle watercolours from 1972 of a woman tending to wounded soldier. The artist’s notation reads “Everyone wants to return to the trenches”.

Many artists were killed or wounded in the field and all risked their lives repeatedly in the name of nationalism and their art. Space here has allowed only a handful of works and artists from the Frontline Collection to be shared. They are illustrative of the genre and together reveal a rarely told story of just how important the contribution of women was in Vietnam’s turbulent history in the lead up to Vietnam’s independence and a story that deserves greater recognition internationally.

The Autonomous Design Group is a design collective that understands art as a tool for liberation.
Culture