Editorial note: The movement is currently regaining momentum after a hiatus during the Covid-19 pandemic and a lower frequency of new occupations at the beginning of Bolsonaro’s presidency. Faced with multiple challenges - driven by long-standing inequalities that have only been exacerbated by President Bolsonaro and the pandemic - the movement has adopted new political lines and more occupations to fight the current crisis are now planned.

At the start of October, three new occupations were carried out by the MST in the states of São Paulo, Bahia and Rio Grande do Norte, in the context of the struggle for popular agrarian reform. And more occupations are coming, says Alexandre Conceição, member of the MST's national coordination: this process "could be extremely significant due to the political conditions and the current crisis, but also due to the government's incompetence in not meeting the needs of the Brazilian people in the economy, employment and income”. Conceição spoke with Nanci Pittelkow about this moment in an interview with De Olho nos Ruralistas.

Alexandre Conceição: During the pandemic we decided, as an organization, that we would follow the World Health Organization's (WHO) guidelines and help prevent the spread of the virus. While we were taking care of our health and tried to preserve lives, we also adopted some political lines.

First, resistance and productive isolation. By resistance we mean the need to resist the violent evictions coming from Bolsonaro and his allies -  active resistance is resisting in our territories. The "productive" part is to continue producing food despite Bolsonaro dismantling Incra (National Institute for Colonization and Agrarian Reform), implementing regressive public policies and depleting the budget for Agrarian Reform.

The second element of our political orientation is solidarity like producing food as people were starting to go hungry again in Brazil. A year and a half ago, we had already understood that the reality of hunger had returned to Brazil and that the pandemic would aggravate it even further. Therefore, our territories should be spaces for building solidarity, in other words, to produce food.

The third is precisely to denounce issues such as the ownership of large private estates and denounce all forms of violence:  racial violence, violence against women, children and the elderly, which increased during the pandemic. In this sense, throughout our productive isolation and the pandemic, we could not occupy due to our own political decision, and not as a result of all Bolsonaro’s nonsense. 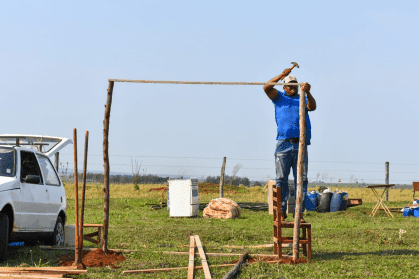 Land occupation happens because those who live in that area feel the need and are willing to fight for the land. The MST helps organize this political act of identifying unproductive large estates. We have never abandoned our fundamental strategy of occupying large estates because as long as this country has a large concentration of land, wealth and income, we will not have true democracy. Therefore, to fight the Bolsonaro government and inflation on food prices, we needed to resist in our territories and, at the same time, follow Covid-19 guidelines while waiting for the best moment to resume our occupations. With the advancement of the vaccination process, that moment is coming.

We are in a huge social crisis: more than 20 million people have nothing to eat; more than 60 million people don't know if they're going to wake up tomorrow and have a cup of coffee; and there are millions of people who do not have a home. Agrarian reform and land occupation immediately resolve the housing crisis and immediately resolve the need for food. We believe that the upcoming occupation process could be huge due to the ongoing political conditions and the crisis we are currently facing, It is also due to the government's incompetence in meeting the needs of the Brazilian people with regard to the economy, and employment and income generation.

De Olho nos Ruralistas: We know that, even with judicial rulings against it, there have been several repossessions. Does the MST foresee a further increase? 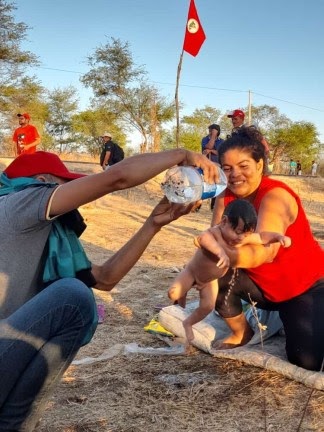 Families have retaken the area in Seridó, Rio Grande do Norte. (Foto: MST)

Alexandre Conceição: We are seeing an intensification of the struggle in rural areas. On the one hand, the old and outdated large state is trying to steal public lands, with land grabbing and the so-called “Titula Brasil”. This is actually a program created by the government, in an alliance with landlords, to steal public land and allow land grabbing. On the other hand, agribusiness is earning millions of dollars with the production and monoculture of soybeans and meat for export which, moreover, is extremely poisonous. So, the dispute over territory will be intensified by the social crisis and by the mobilisation that the rural movements will have to carry out.

Firstly to resist in the already acquired territories and, secondly, to reconfigure and reacquire territories. We cannot allow public lands that, according to our Constitution are destined for agrarian reform to be handed over to bandit landowners, as Bolsonaro wants. The intensification of the political struggle tends to be greater among the rural poor who have to fight against the large private estates, agribusiness and the Bolsonaro government to gain access to land. On the one hand, there are these three heavyweights and on the other hand, there is the vast majority of society who have already understood that agrarian reform is urgent and necessary to fight inflation, have a process of solidarity, and at the same time, generate jobs and income.

Society understood during the pandemic that the MST's work,  for which we have even won international awards, is not only to dispute the territory but to preserve that territory and, at the same time, place it at the service of Brazilian society by producing food. This Is not what the large estates and agribusiness want because they want to speculate and to keep the people enslaved and starving. I have no doubt that we are going to see a major struggle in the next period of territory disputes because society stands with us. The need for agrarian reform focussed on healthy, agroecological, food production which protects life and also the health of anyone who consumes these products, is now understood.

De Olho nos Ruralistas: With the end of the pandemic nearing, is it possible to perceive a greater willingness of people in rural areas to get involved in the struggle? 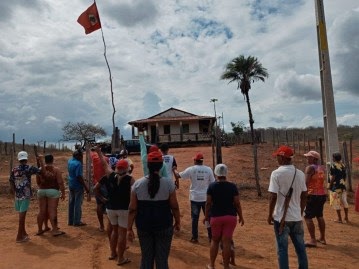 Families have occupied a private estate of 600 hectares and are planning to produce healthy food. (Photo: MST)

Alexandre Conceição: Without a doubt. The reduction in occupations dates back to Dilma's government when the creation of settlements decreased. Then there was the economic crisis and President Dilma’s impeachment, or rather, the coup. The coup constituted a bridge to the abyss in rural areas which, duringTemer's government, consisted of dismantling public policies. First, they closed the Ministry of Agrarian Development (MDA) and then they closed the National Secretariat for Human Rights and the one for Racial Equality. In doing so they destroyed the social policies that guaranteed the survival and maintenance of income and employment. You see, peasants are also reading the situation and if public policies are being reduced, they will not occupy and wait for a better moment.

The current situation is complicated because the movement has more political weight but at the same time, the situation and the financial, economic and social crisis in the country are getting worse every day. People would prefer to occupy land rather than run after a garbage truck, go to a slaughterhouse to get a piece of bone or buy chicken feet for R$ 8 a kilo because on the land they can produce their own chicken,  cattle, cassava or corn. Consequently, we can have a broad debate with Brazilian society about the possibility of taking the fight directly to the large private estates and the Bolsonaro government.

Nanci Pittelkow is a journalist