Editorial Note: The intensifying economic crisis in Turkey became one of the major triggers of delivery workers’ protests in recent weeks. At the start of the new year, the Turkish Statistics Institute (TUİK) announced an official inflation rate of 36,08%, while independent economists and academics have stated that the actual inflation rate is closer to 80%. However, many corporations chose to rely on the official inflation rate to limit the wage increase of workers to a minimum. For instance, the food delivery company Yemeksepeti Banabi announced a mere 10% raise for its workers. This led to the recent outburst of protests. Many other delivery workers of similar corporations like Trendyol Express, Yurtiçi Cargo, Scotty, Aras Cargo, Sürat Cargo, Migros Warehouse started to protest against the small amount of wage increase they received. While Trendyol Express workers managed to win an increase in their wages from 11% to 39%, many other workers still continue to fight. As such, the protest of Yemeksepeti Banabi workers reached its second week on February 14, 2022.

Yemeksepeti Banabi workers gathered in front of the company headquarters at Levent to demand a higher raise. The couriers demanded their rights be respected, lit torches and shouted slogans. Delivery workers also organized protests in İzmir, Eskişehir, and Ankara.

Workers stated that their wages increased below the official inflation rate and they “want a net salary of 5500 Turkish lira”. Additionally, they said that they are working without social security under the self-employed courier business model in which they are deprived of any social rights and are forced to pay their own pension contributions to the social security provider Bağ-Kur. 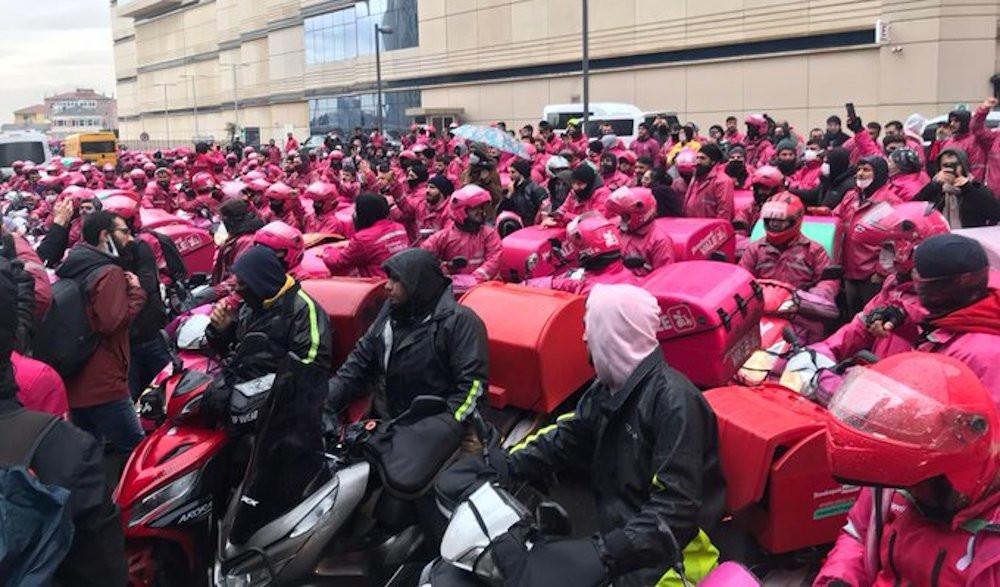 The All Shipping Workers Union (TÜMTİS) stated that they organized to obtain union representation at Yemeksepeti and reached the majority number that the law demands to unionize the workplace. However, the employer is using legal loopholes to prevent unionization rights from being instated.

‘Struggle For The Future’

The head of the Transportation Workers Union (Nakliyat-İş) Ali Rıza Küçükosmanoğlu supported the protest in İstanbul and said: “Today, thousands of motorcycle couriers, valets, and warehouse workers are embracing this protest. This resistance, this struggle for rights is the struggle for the future of all our friends, all laborers and their children. This struggle is also the struggle for the pride of the working class. Yemeksepeti continues to deceive and commit fraud on this issue.” After making a press statement, delivery workers chose 4 representatives and entered the company headquarters to negotiate with the authorities.

"A decarbonized economy can be a part of a better economy, with better work and a better standard of life."
Labor
2021-11-23

Tech capital flows unencumbered across borders, and so should tech workers’ solidarity and action
Labor