‘Green City’ drives violence on environmental defenders in the Philippines The Ayta Hung-ey tribe relies on agriculture for both community subsistence and cash crop. They plant rice, corn, banana, root crops, and vegetables. If there are surplus products, the villagers transport it in town centers to earn enough money. During the dry season, some villagers sell charcoal out of used and spare wood. However, income from this has always been minuscule as they only receive P90-P100 ($1.76 – $1.95)per sack. 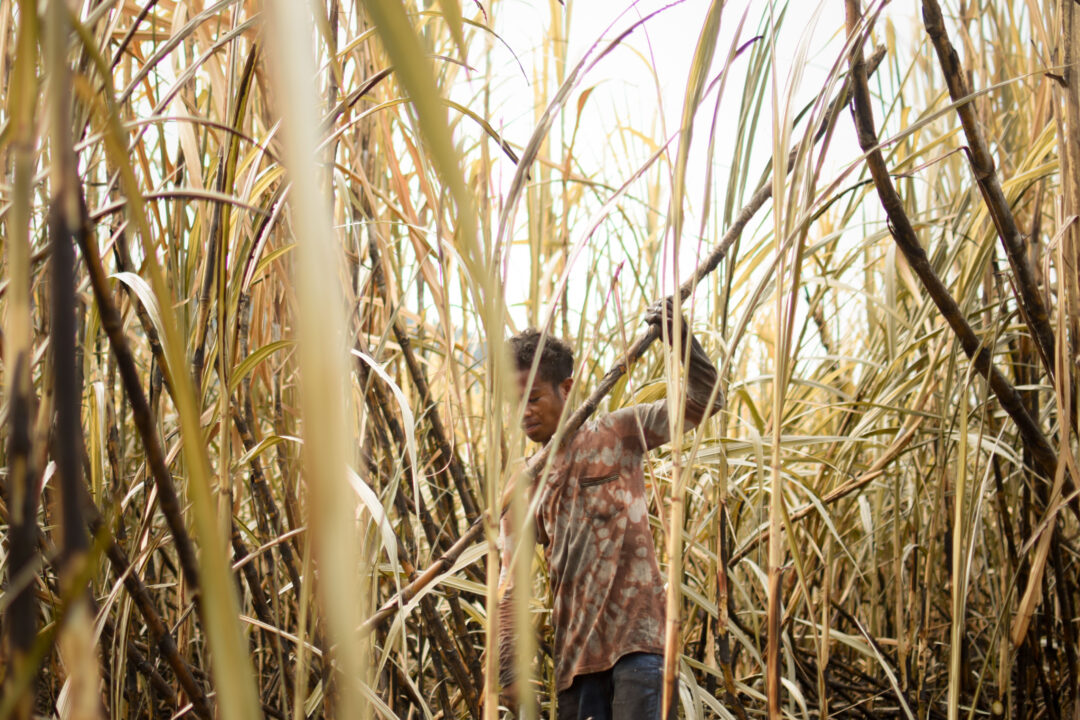 As a landlocked community, villagers depend on their rivers and streams as major sources of fish, snail, shrimp, and crab. While their forest is home to wild boar, deer, birds, medicinal plants, and a century-old mango tree – a sacred tree for Ayta Hung-ey. They perform rituals around the tree to ask for guidance, healing, protection, and good harvest because they believe that the spirits of their ancestors live with the tree. 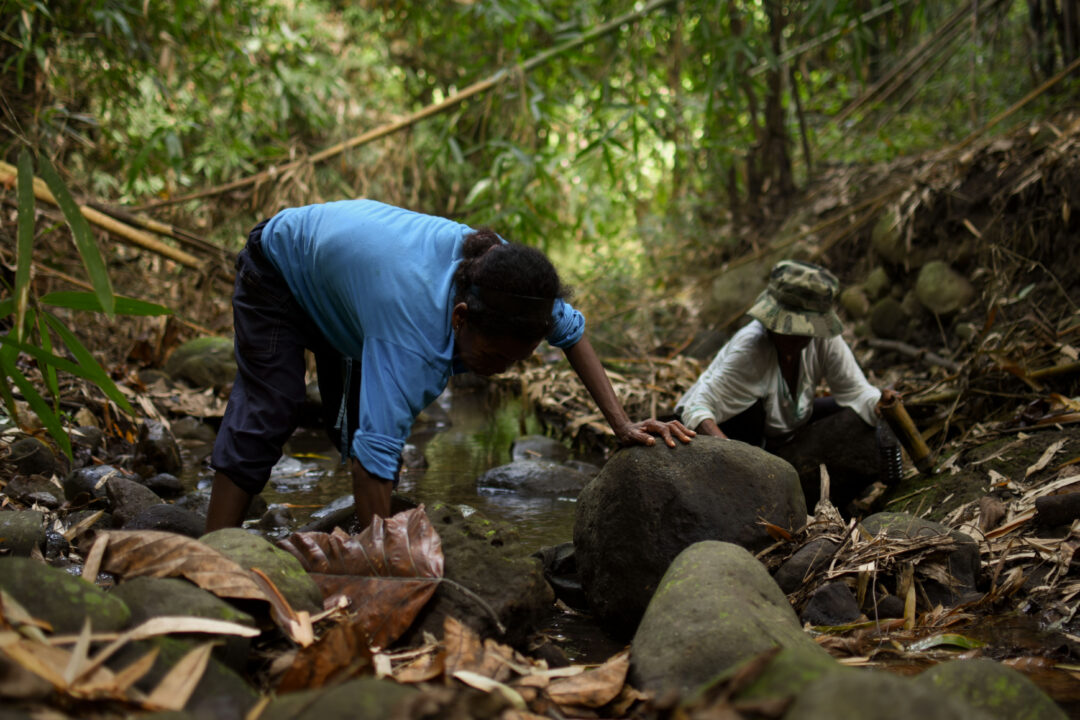 Although simple, the life of Ayta Hung-ey has never been smooth sailing. Historical government neglect, institutionalized discrimination, and other forms of oppression have been strong weapons to divide indigenous communities and exploit their resources.

“Indigenous peoples remain poor because we are marginalized. Worse, our land is taken away from us for the benefit of the few,” Chieftain Pet explained.

As the claws of so-called development such as the New Clark City reach into the indigenous territory of Ayta Hung-ey, the people find their survival in peril.

The New Clark City (NCC), formerly known as Clark Green City (CGC), is being promoted as the first “smart, green, and disaster-resilient city” by the Philippine government through the Bases Conversion and Development Authority (BCDA). This project covers 9,450 hectares of land in Tarlac province – approximately 100 kilometers north of Philippine capital Manila. The NCC with an estimated development cost of USD 14 billion is considered as one of the biggest infrastructure projects of the highly criticized Build! Build! Build! Program of the current Philippine administration.

Branded as a ‘green’ city, the BCDA reportedly plans to develop 40 percent of the area, leaving 60 percent open spaces. The NCC is poised as a viable alternative to Metro Manila as the megacity continues to experience congestion, pollution, and urban decay.

International finance institutions (IFIs) such as the Asian Development Bank (ADB) have actively engaged BCDA in promoting and implementing a new planned urban center. In ADB’s news release in 2017, the NCC is considered as “… ADB’s first transaction advisory mandate covering multiple sectors in the Philippines, including transport, waste management, gas distribution network, IT infrastructure, mixed income housing, national government center, and food terminal of CGC.” In this regard, the ADB is committed to “assist BCDA with the overall evaluation of the plan for the city and assist in running tender processes for suitable PPP [Public-Private Partnership] projects to attract private sector participation”. 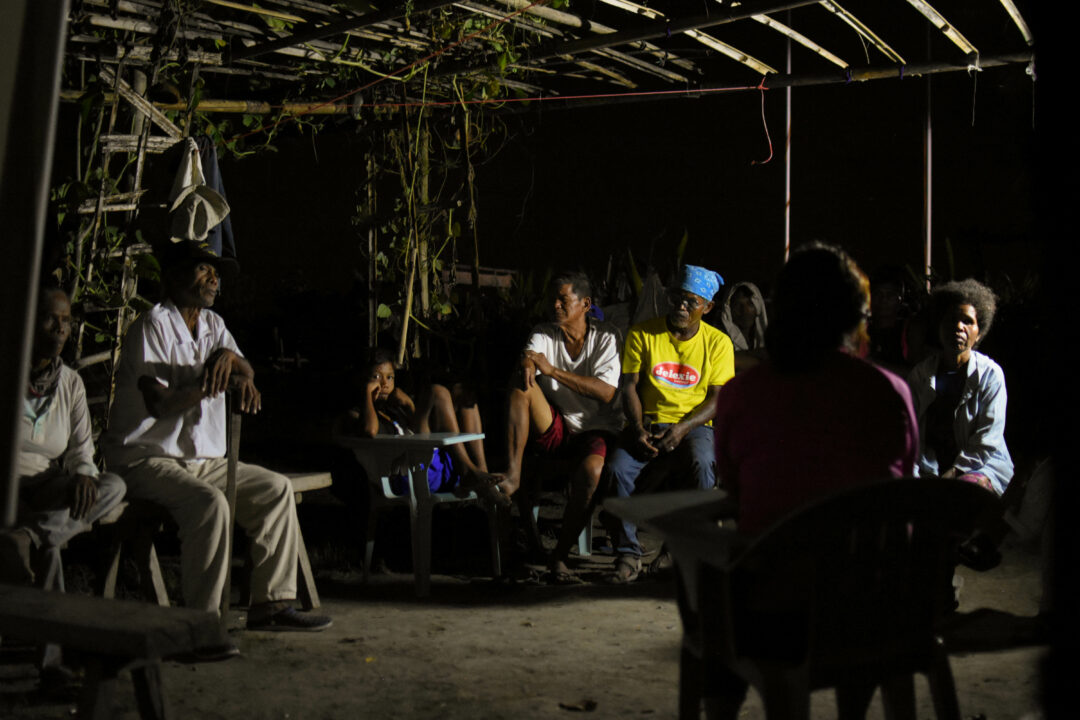 Community members gather in a meeting to discuss updates and share their concerns about the New Clark City.

Citing numerous risks and irreversible damages on the people and the environment, activists, human rights organizations, and scholars have condemned the NCC project. The findings, in fact, of the biodiversity assessment study funded by the ADB reveal that the New Clark City will likely result in “reduced quality of habitat, species population, and net primary productivity.” Yet, the ADB continues to finance the multi-billion dollar infrastructure project that would destroy the lifeblood of the Ayta Hung-ey.

Chieftain Pet recalled how a certain contractor first entered their community in 2014 and was only asking about community roads. “We thought the government would soon build roads for us. But shortly after a year, we were alarmed to see a number of road projects were taking place without our consent. Worse, the project staff brought armed military personnel as escorts in one of their community visits,” she narrated.

In 2017, despite strong opposition from affected communities, the government pushed through with the construction of roads and sports facilities in time for the 2019 Southeast Asian Games (SEA Games). Consequently, vast agricultural production areas were cleared and hills were leveled to the ground. The BCDA fenced off communal properties which prevented the villagers from accessing their fruit trees, vegetables, and other crops. Their natural rivers and streams were not spared from destruction due to river diversion. 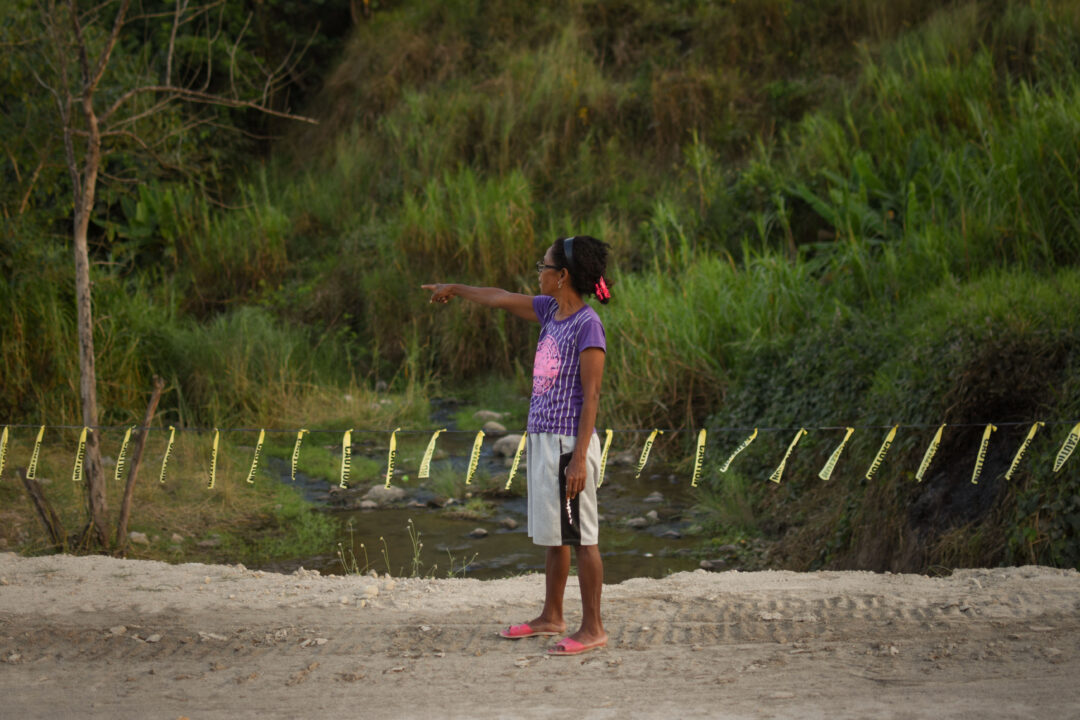 Nanay Maria is pointing to one of the rivers that was diverted by BCDA. The communities claim that they could no longer find any freshwater crab and shrimp in this river after the road construction.

With its enormous development plan that poses community displacement, none of the 578 indigenous families in Sitio Sapang Kawayan were informed and consulted about the project. The Ayta Hung-ey communities have been requesting the National Commission on Indigenous Peoples (NCIP) to facilitate free, prior and informed consent (FPIC) process. Until now, their right to FPIC has been persistently disregarded. According to the Hung-ey tribe elders, the BCDA even claimed that the land belongs to the government and insisted that no indigenous peoples inhabiting the project area. “But when I asked them to present those documents, they just refused,” Chieftain Pet explained.

There were no community meetings nor negotiations. They were only told, “kapag naamoy ng bulldozer ang lupa mo, babayaran ka.” (If the bulldozer runs into your land, you will get paid.)

The villagers frustratedly expressed how helpless they were when they were forced to accept the compensation unilaterally decided by BCDA. In 2018, the developer offered P300,000 ($5,854) financial compensation to Tatay Nelson whose portion of his land has been developed into a golf course. He received the first tranche in April 2021 while the schedule of the next tranche remains uncertain. The terms and conditions were not even discussed to him. “My only option was to accept the money, otherwise, I would be losing my land without getting anything,” Tatay Nelson related. 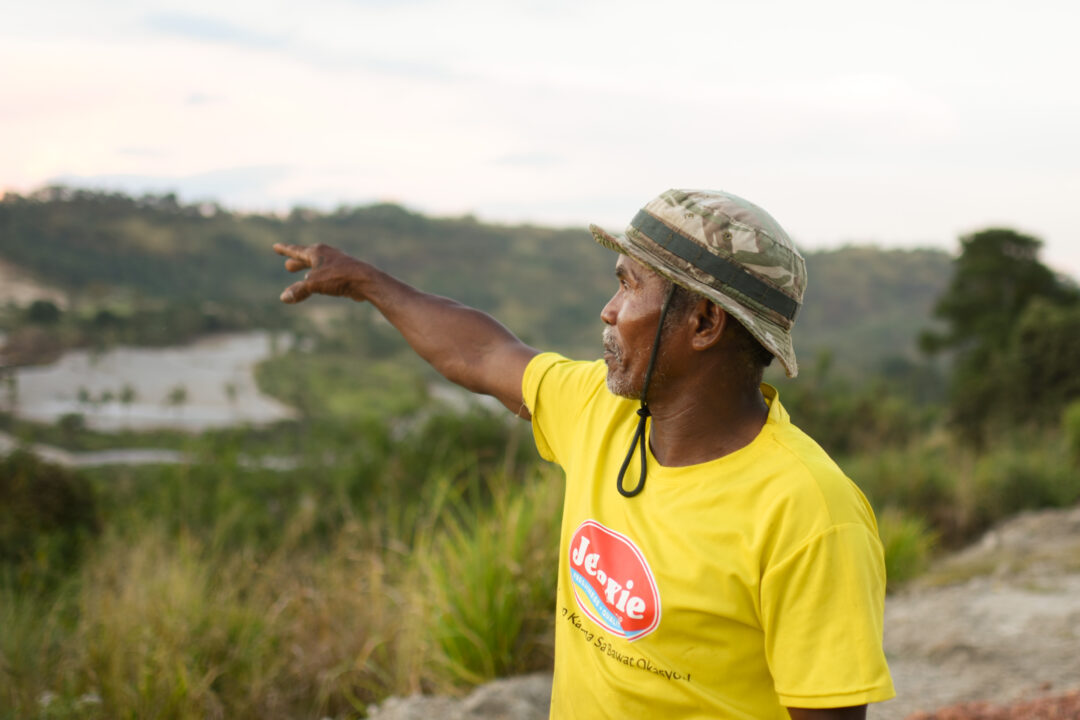 From afar, Tatay Nelson shows his land that is being developed into a golf course by a Korean business entity.

‘We are not slaves in our own land’

The community has engaged local and national authorities to collectively raise concerns over the lack of consultation prior to the construction phase. They submitted letters and petitions to different government agencies to register their opposition and reiterate their rightful ownership of their ancestral domain.

“If given the chance, I would like to speak with the Asian Development Bank, investors, and corporations to ask them why they are supporting the New Clark City project that brazenly violates our rights,” Chieftain Pet stated.

During the pandemic, the road construction has never stopped. With the imposition of lockdown, villagers have been restricted to move around and monitor the construction activities. Since their mobility has been limited, the villagers congregated in an area near the community church for easier coordination and community mobilization. In most instances, those who intended to visit the community had to ask permission from private security in the area before entering. 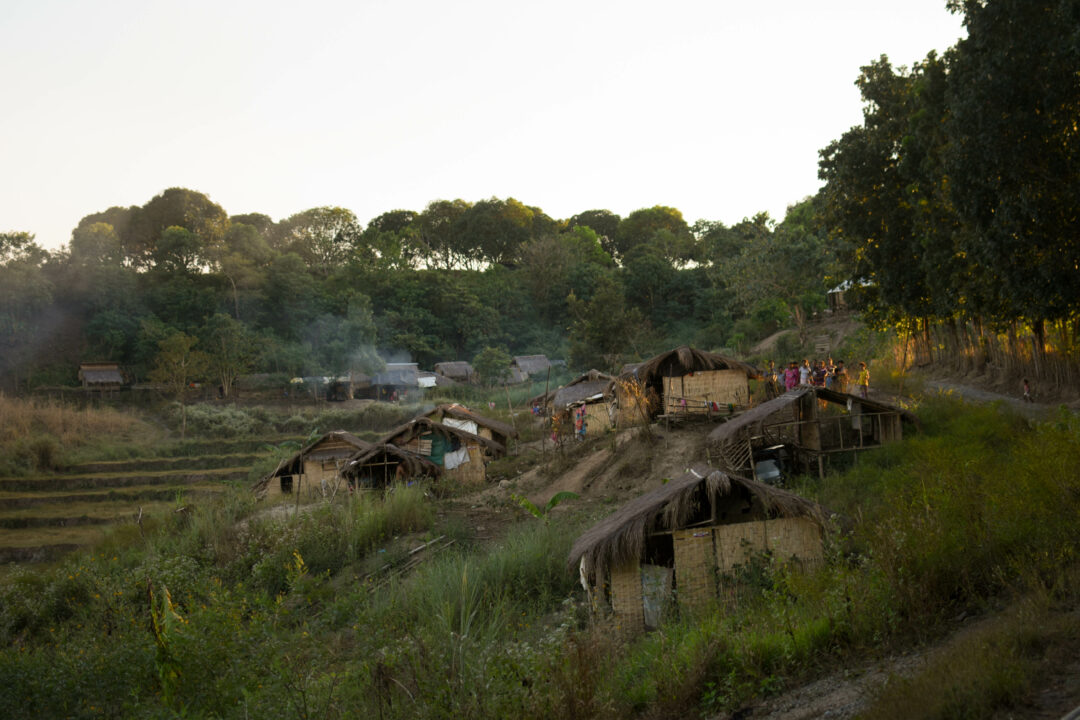 Houses of villagers who decided to move and settle near the community church.

Their ancestors resisted Spanish colonization and joined the HUKBALAHAP – a communist guerrilla movement – against Japanese invasion to defend their land and territory. For Ayta Hung-ey, protecting their ancestral land is their collective resolve.

“It is only right to fight for our land. This land is our life and identity – without it, the Ayta Hung-ey will not survive,” Chieftain Pet said.