The coronavirus is driving the world into another global recession. Companies are closing up shop, many workers are self-isolating, and the wheels of the global economy are slowing almost to the point of stopping.

To combat the economic cataclysm, governments in the Global North are rolling out major plans for stimulus and bailout packages, ranging from hundreds of billions to trillions of dollars. But what about poorer countries, who cannot afford such massive bailouts?

With high credit ratings and large economies, many countries in the Global North can borrow at interest rates close to zero and inject large amounts of money into their economies. Many nations in the Global South, however, suffer major structural obstacles to responding on a similar scale. Many are locked into crippling debt, high interest rates, and structural adjustment programs that prevent them from undertaking spending programs.

If we are to avoid the COVID-19 pandemic deepening inequality and further harming poor countries, then we will need to attack the neocolonial shackles holding them back — and clear the way for a Global Green New Deal.

To understand the challenges facing the nations of the Global South as they grapple with COVID-19 and its fallout, we must understand the colonial and postcolonial strictures standing in their way.

While the Global South achieved political independence with the end of colonialism, the West continued to exert control over its former colonies. Rather than directly running other nations, Western countries used what former Ghanaian president Kwame Nkrumah called “neocolonial domination” to get their way through political and economic means.

The figure below lends credence to Nkrumah’s claims: the average North-South gap in per-capita income has grown, not shrunk, since the 1960 United Nations Declaration on the Granting of Independence to Colonial Countries and Peoples, which affirmed the right of all people to self-determination and proclaimed that colonialism should be brought to a speedy and unconditional end. Global inequality is now so high that the global Gini coefficient, which measures the level of inequality across the world, is about the same as South Africa’s — one of the most unequal societies on the planet. 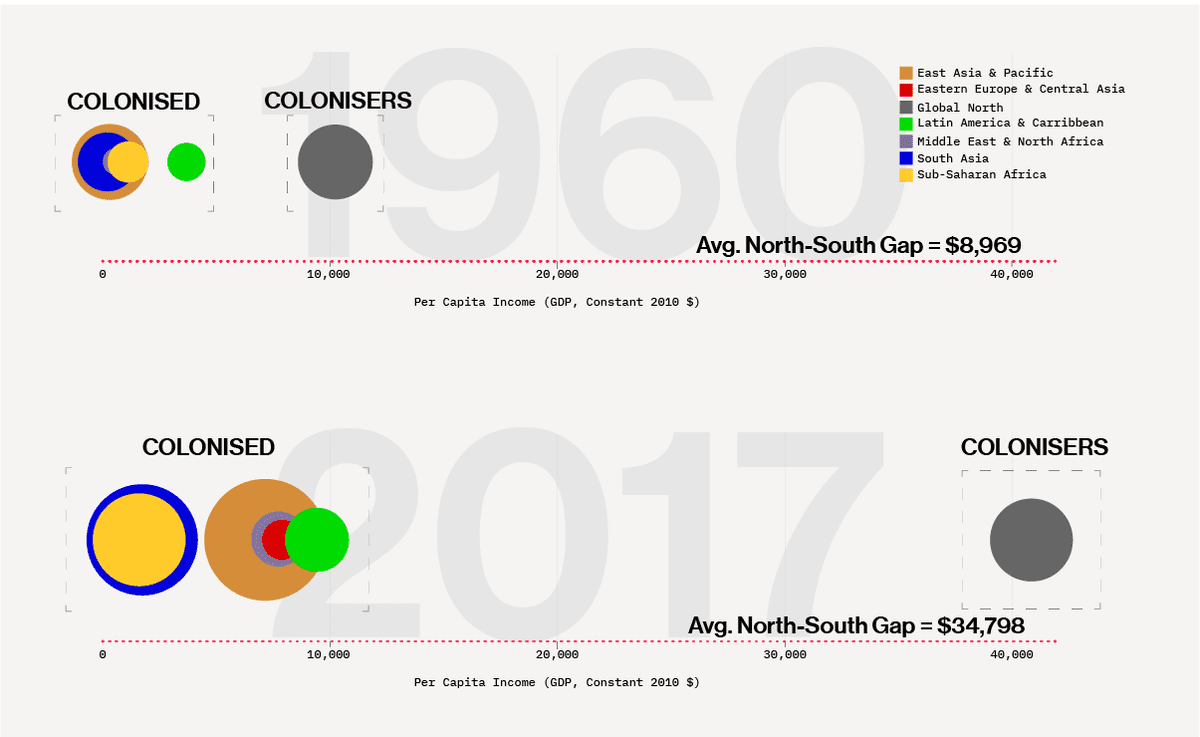 Part of the reason for the yawning gap between rich and poor countries is that the Global South has been locked into a form of indebted servitude to the Global North. Eager to dig themselves out of poverty and unable to raise capital through other means, developing countries have been forced to borrow money with stratospheric interest rates — often from the same countries that colonized them.

As the University of Cape Town’s Misheck Mutize points out:

“African governments are paying interest of 5% to 16% on 10-year government bonds, compared to near zero to negative rates in Europe and America . . . On average, the interest repayment is the highest expenditure portion and remains the fastest growth expenditure in sub-Saharan Africa’s fiscal budgets.”

Another typical condition of the debt: neoliberal structural adjustment programs (SAPs). Beginning in the 1970s and ’80s, the World Bank and the International Monetary Fund forced countries to adopt a raft of regressive policies — deregulation, privatization, public spending cuts — before it would open the purse strings.

Now staring down the coronavirus pandemic, Global South countries are faced with a triple bind: to have the money to dole out stimulus and bailouts, many will have to take on more debt. To secure loans, they may have to impose additional “structural adjustment” policies. And those very measures will hollow out an already decrepit public sector, leaving countries ill-equipped for a mass pandemic.

The coronavirus is ripping across the globe, laying waste to economies left and right. Responding to this “unprecedented recession” will require an unprecedented mobilization. And one program seems up to the scale of the task: a Global Green New Deal (GGND).

In the next three months alone, COVID-19 could cause 195 million job losses, according to the chief of the UN International Labour Organisation. Researchers from Stanford University have estimated that a GGND that gets the world running on 100-percent renewable energy could create 28.6 million jobs compared to sticking with the fossil-fuel status quo. And that’s just in the energy sector.

As the Intergovernmental Panel on Climate Change has highlighted, keeping warming to 1.5°C will require transforming virtually all sectors of society. Enacting a GGND up to that task could generate at least 170 million additional jobs — almost entirely making up for projected job losses as a result of COVID-19.

But if the Global South is to benefit from a Green New Deal, it will need to be released from the neocolonial chains holding them back. While the potential benefits of a GGND are great, a recent United Nations Conference on Trade and Development (UNCTAD) report notes, the investment requirements needed are massive. In the words of Mukhisa Kituyi, secretary-general of UNCTAD, “the financing numbers are daunting, from ‘billions to trillions’, requiring an additional 2.5 trillion dollars a year, just in developing countries.”

UNCTAD argues that developing countries would be largely unable to invest in a domestic GND due to their high indebtedness and inability to raise capital and access low-interest loans. The agency recommends overhauling the rules of the international trade and monetary systems so that all countries could carry out the needed investments to decarbonize their economies. Central to the report’s recommendations: revising SAPs, granting debt relief, and reworking the way debt is structured, so that developing countries can help fund a GGND. Basically, UNCTAD is recommending an undoing of much of the neocolonial structures that are constraining the Global South.

Additionally, the UNCTAD report argues, “what is now required is a coordinated investment push on an unprecedented scale and across the entire global commons.” That would mean the Global North helping foot the bill for much of those investment needs, repaying the vast ecological and colonial debt they owe to the Global South. Yanis Varoufakis and David Adler’s proposal to create an international Organization for Emergency Environmental Cooperation would be one way to do just that. It would raise $8 trillion each year to fund a Global Green New Deal and help countries address the impacts of climate change according to their need. It’s exactly what we need in the face of an international crisis.

As the climate crisis deepens and an unprecedented pandemic pushes us toward a global recession, we must break the chains of neocolonialism that continue to shackle the Global South and make it possible for all countries to transition to a sustainable economy. A healthy, socially, and ecologically just world demands it.