The Farmers of Punjab vs. Modi’s Farm Bills [In Photos]

Editor’s Note: This week, thousands of striking farmers are expected to demonstrate in Delhi, in the largest yet mobilization against Narendra Modi’s neoliberal Farm Bills. In this photo essay, writer and photographer Rohit Lohia takes us through the farm bills, and the mass resistance they’ve ignited across the country, focusing on the center of the protests: Punjab.

Since October 1, hundreds of thousands of farmers from across the Indian state of Punjab have mobilized in demonstrations, effigy-burnings, and blockades in protest against three new agricultural laws that they say risk their very lives and livelihoods.

Collectively known as “the Farm Bills,” the Farmers Produce Trade and Commerce (Promotion & Facilitation) Act, the Farmers (Empowerment & Protection) Assurance and Farm Service Act and the Essential Commodities (Amendment) Act were passed by the central government of India in September to much praise from Prime Minister Narendra Modi, and much fear and anger from smallholder and landless farmers across the country.

The Farm Bills are a drastic and pernicious step toward the privatization of the Indian agricultural sector, dismantling long-standing government protections in the name of so-called market efficiency. Among other things, the bills incentivize private hoarding of essential commodities, erode the “mandi” system, in which smallholder farmers could sell their goods to government-run wholesale markets at assured prices, and otherwise open farmers to the vagaries and brutalities of the private marketplace. While the old system may not have been perfect, to farmers, the new bills amount to a death warrant.

Though the Farm Bills affect the entire country, opposition has been strongest in Punjab, where the mandi system has played an especially critical role for local farmers. Now, farmers have launched sit-ins across the state, blocking railroads, toll plazas, and gas stations and shopping malls owned by billionaire businessmen Mukesh Ambani and Gautam Adani, who, with their hands in big agribusiness, are seen to be some of the major forces behind the bills.

Every morning, farmers arrive at the blockades from neighbouring villages carrying food, milk, and demands to unconditionally revoke all three ordinances, which they have nicknamed kala kanoon — the black laws.

Hurdyar Kaur, a woman in her late 60s, has attended protests at the Sangrur railway blockade for the last 20 days. Kaur, whose hand was fractured last month, said “How can I rest at home when my children and people of my age are sitting here? I am willing to die here if it is what it takes to make this regime listen.”

While the ruling National Democratic Alliance (NDA) — led by Modi’s Bharatiya Janata Party (BJP) — has hailed the passage of the bills, others have fought back. The Punjab-based party Shiromani Akali Dal, with its constituency in the Sikh community, has left the NDA altogether, while the Punjab state assembly passed a resolution opposing all three, as well as the newly-proposed Electricity (Amendment) Bill 2020, which would advance similar privatizing interests in the energy sector.

One protester, 29-year-old Dharam Singh, remarked: “We’ve been sitting here for 19 days. PM Modi says there’s going to be MSP [Minimum Supported Price] but we demand this in written form in the law. We can’t understand what the hesitation is...Under the contract farming law, we can’t go to courts, which is going to mean slavery under these companies...We all know this regime has sold everything to Adani, Ambani, and other billionaires. First, they came for Kashmir last year, now they have come for us farmers. We farmers fill everyone’s stomachs but there’s no place for us. Even if emergency or military rule comes, we won’t move an inch.”

The state of Punjab has the highest Sikh population in the country. In 1984, following the assassination of Prime Minister Indira Gandhi by her Sikh bodyguards, many of the communities here were the victims of widespread mob violence, resulting in the tragic deaths of thousands. Many who witnessed the riots, and still remember their wounds, evoke them today:

“The government will try to ruin our names and reputations,” said Darshan Singh, a 50-year-old District President of Bharti Kisan Union (Dakonda), Firozpur. “We have three solutions: the first is to kneel down before the government and accept our defeat. But that’s not in our blood. The other two are if military rule is applied: either we will die, or we will win. That is our solution, to die or to win. We will head towards victory. We are sitting on the land of martyrs.”

“We have been sitting on railway tracks since October 24th,” said Balveer Singh. Singh, at 75 years old, is protesting at Firozpur railway lines on the Pakistani border: “I have been home only four or five times in one month. Otherwise, I stay here day and night. We are ready to die.”

Photographer Rohit Lohia traveled 1500 km in 10 days across the state, documenting all the major protests from the edge of Haryana to the border of Pakistan. The results of his journey — the images of sadness, anger, and determination of the farmers of Punjab — are captured here. 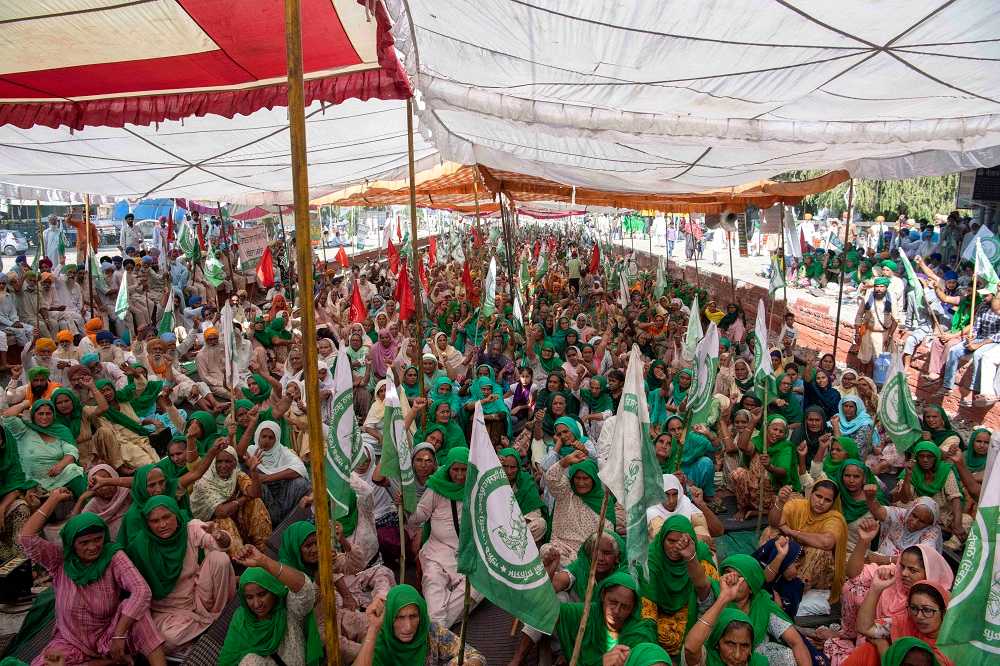 More than 5,000 farmers, men and women, join in a railway blockade in Sangrur, Punjab. 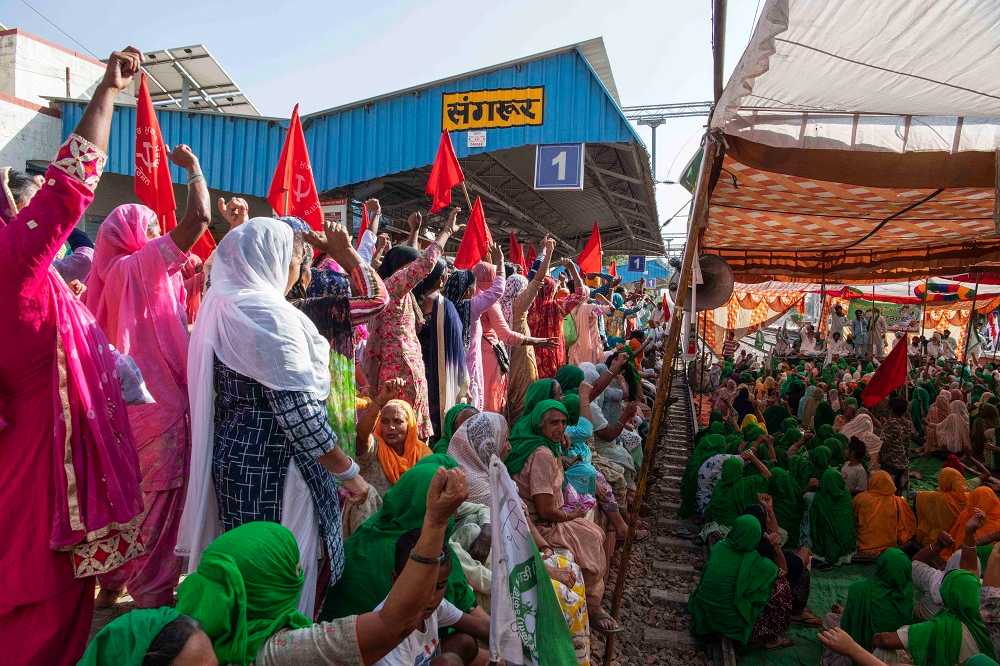 A workers’ association joins the farmers in protest. 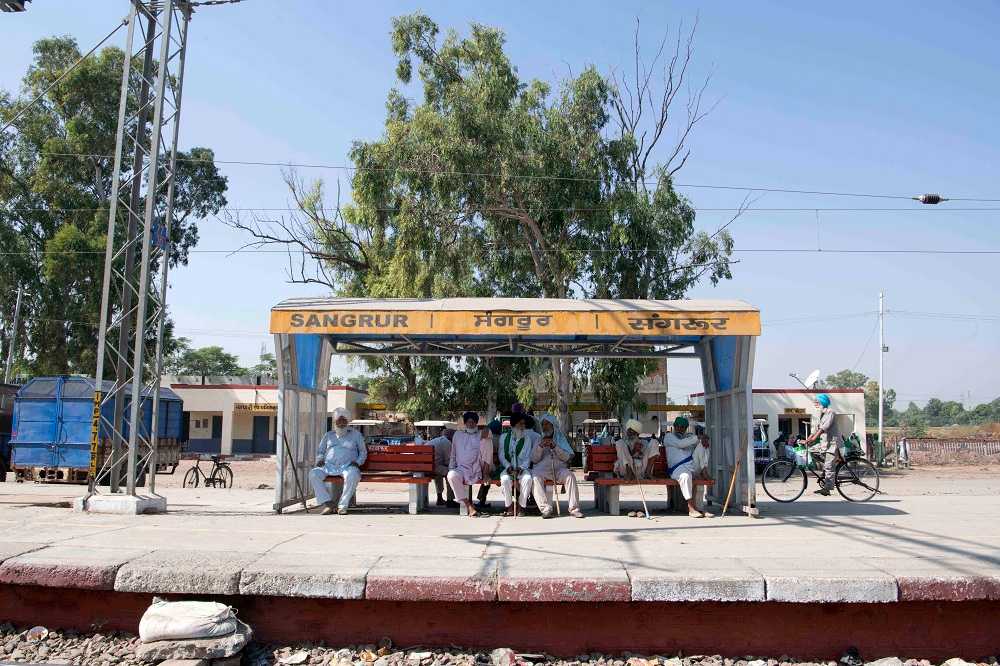 A street scene in Sangrur, Punjab. 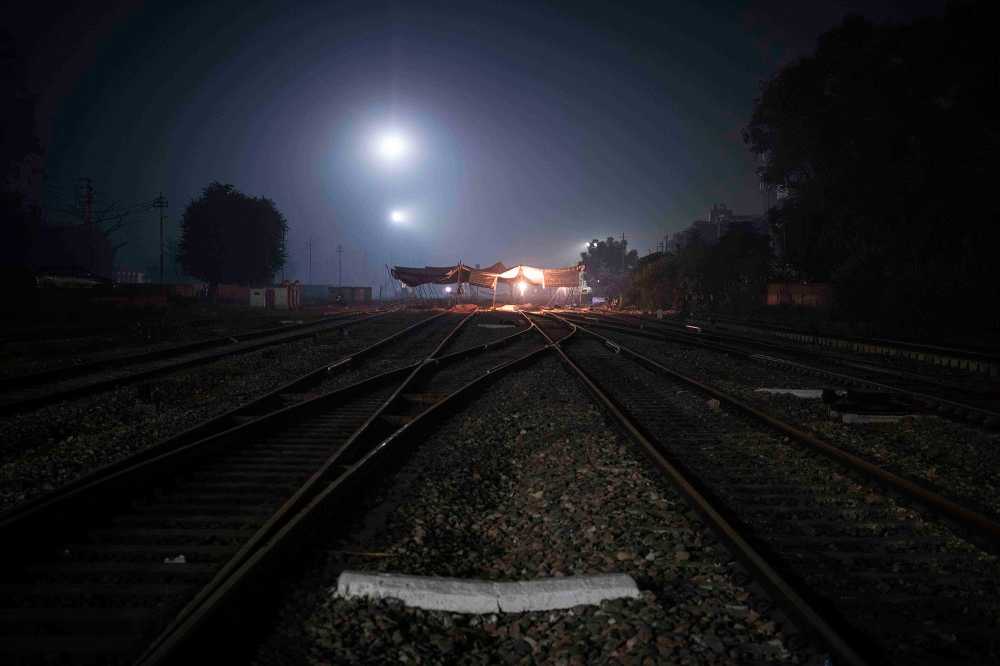 A railway track has been blocked by the Kisan Majdur Sangarsh Committee at Firozpur, Punjab, which lies at the border of India and Pakistan. 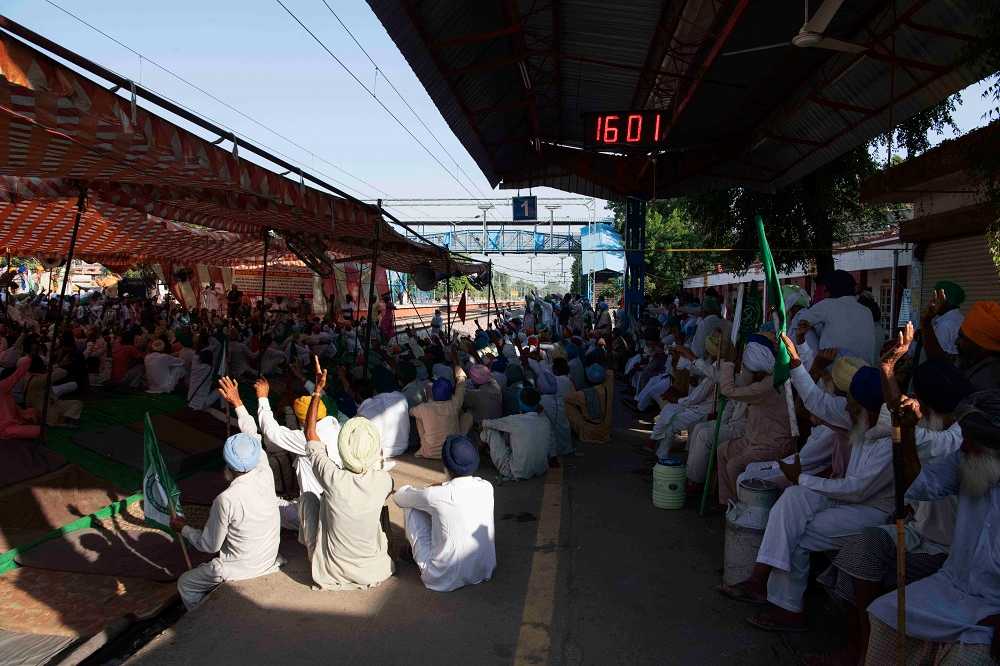 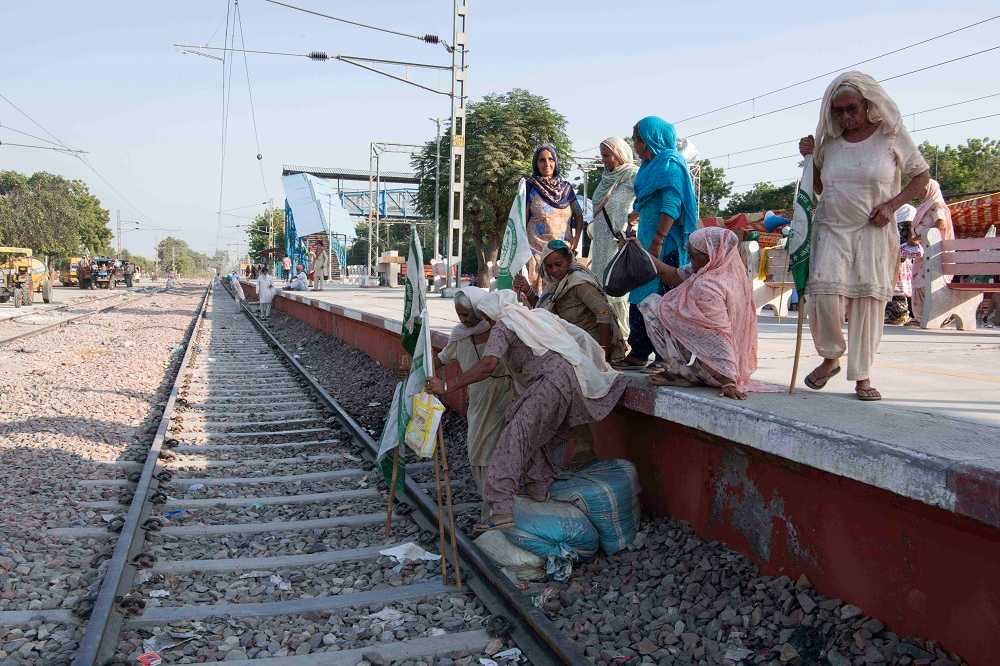 Women and young children have been an important part of the protests. 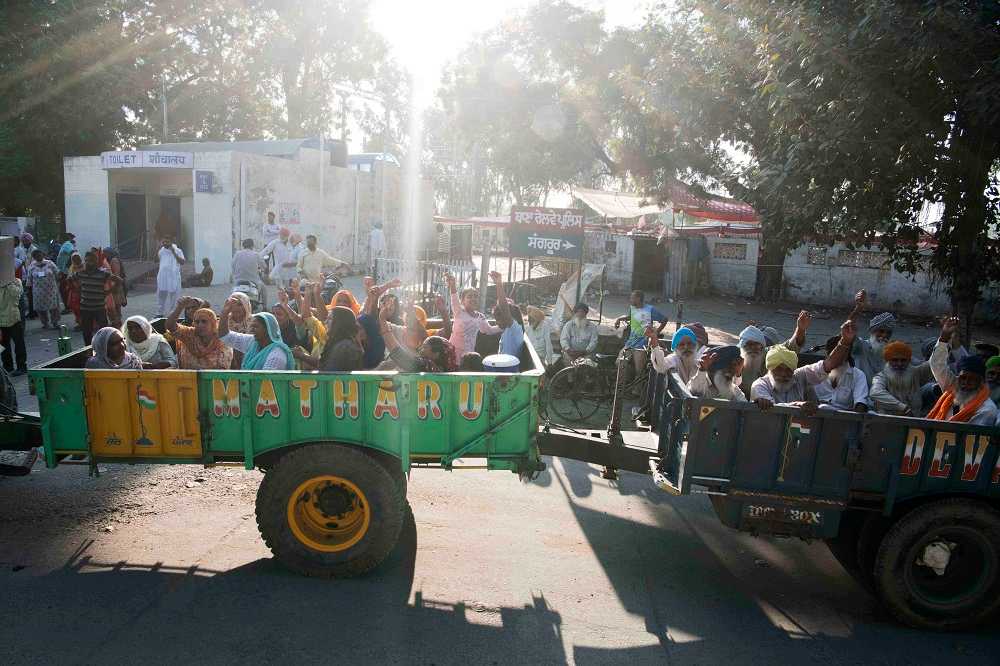 People arrive in tractors, usually at 11 in the morning, and stay until 4 pm every day. 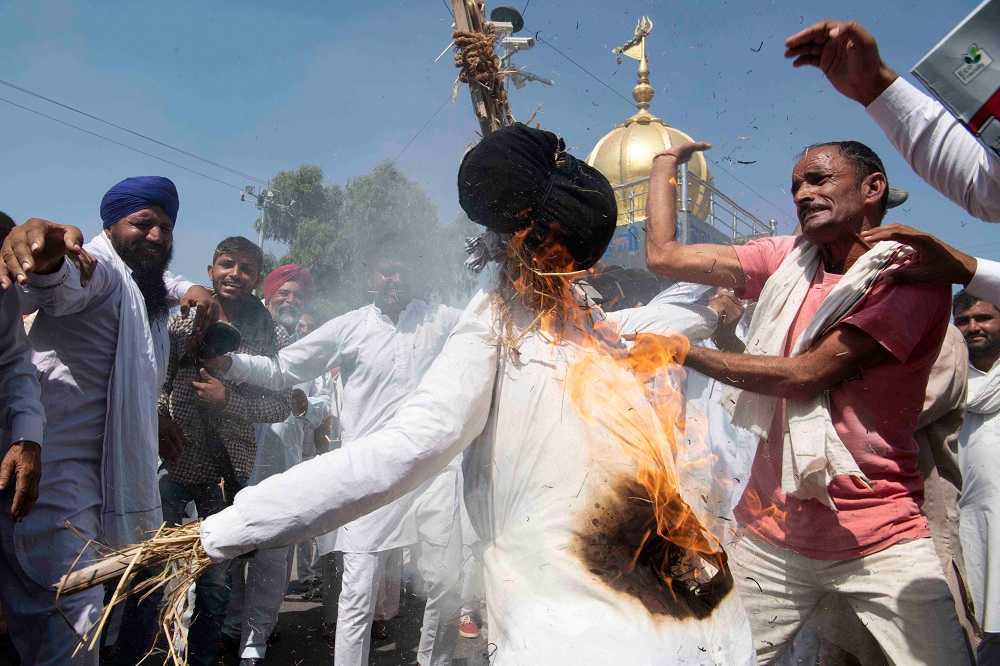 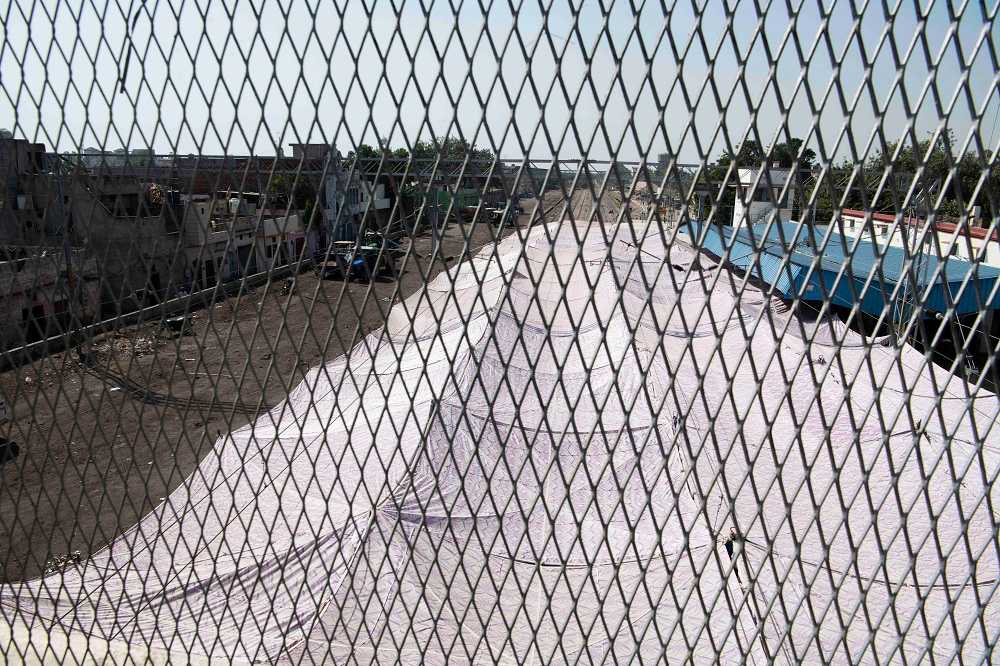 A railway blockade at Barnala, Punjab. 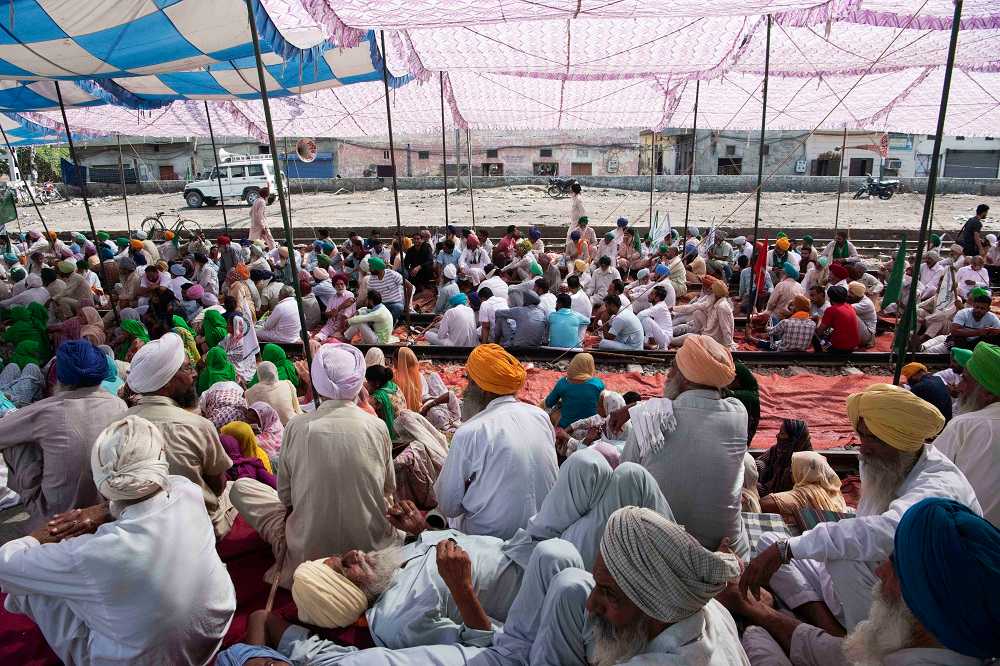 People 50 years old and above are active in the protests. “We will die here if that’s what it takes.” Barnala, Punjab. 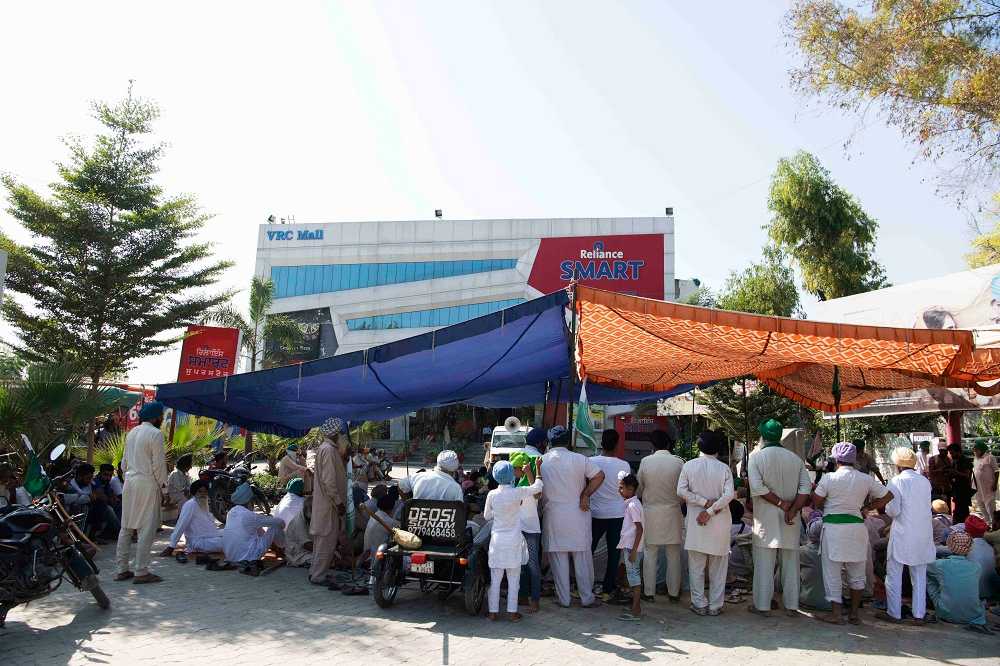 The “Reliance malls,” owned by Ambani, have been blocked throughout the state. Many have switched from his to other telecommunications networks as a form of non-cooperation. Sangrur, Punjab. 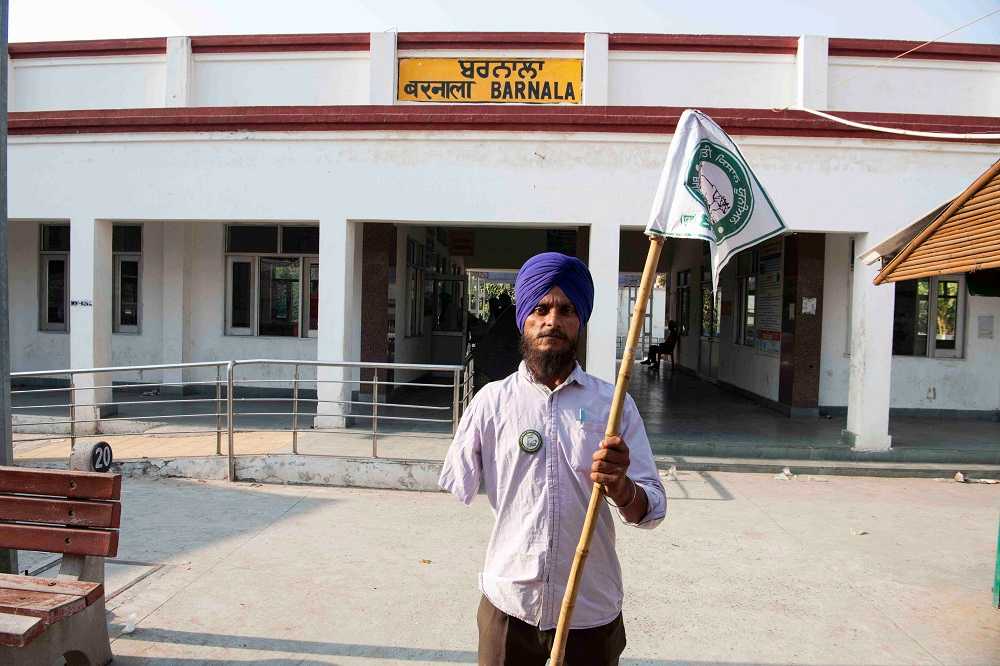 A farmer holds a flag of the Bhartiya Kisan Union (Dakonda). Barnala, Punjab. 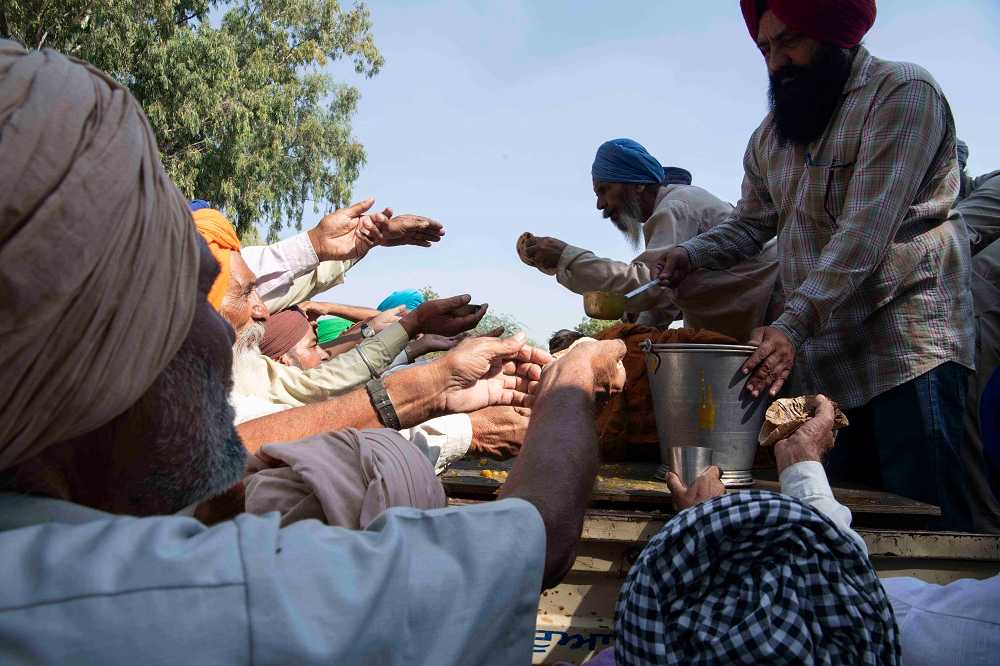 Food and refreshments are handed out for free, as is the Sikh practice of langar seva. 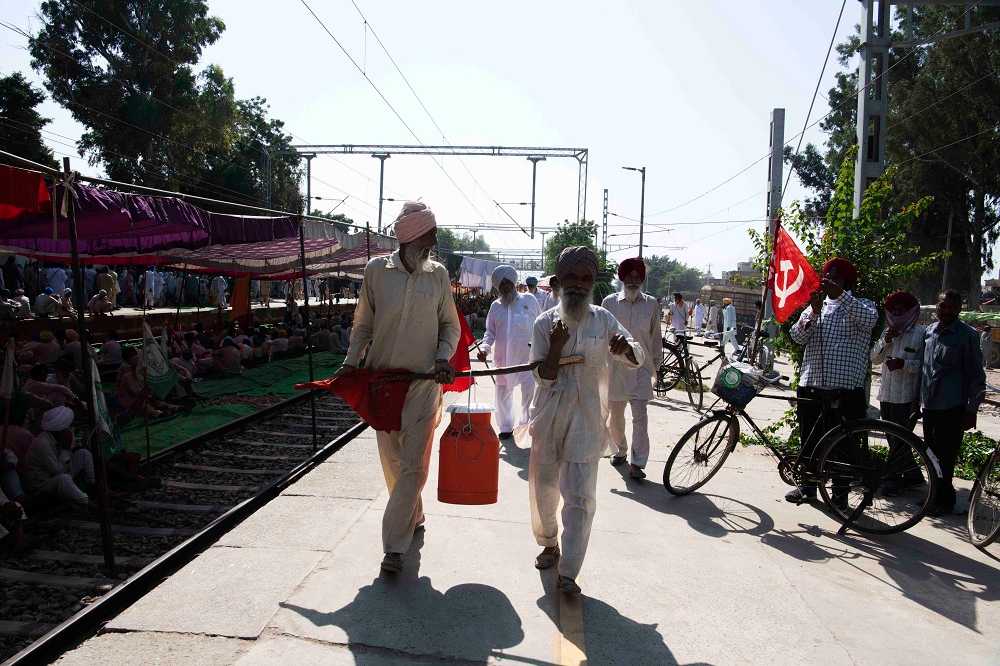 Farmers carry cartons of milk that they have brought from home for refreshments and tea. Sangrur, Punjab. 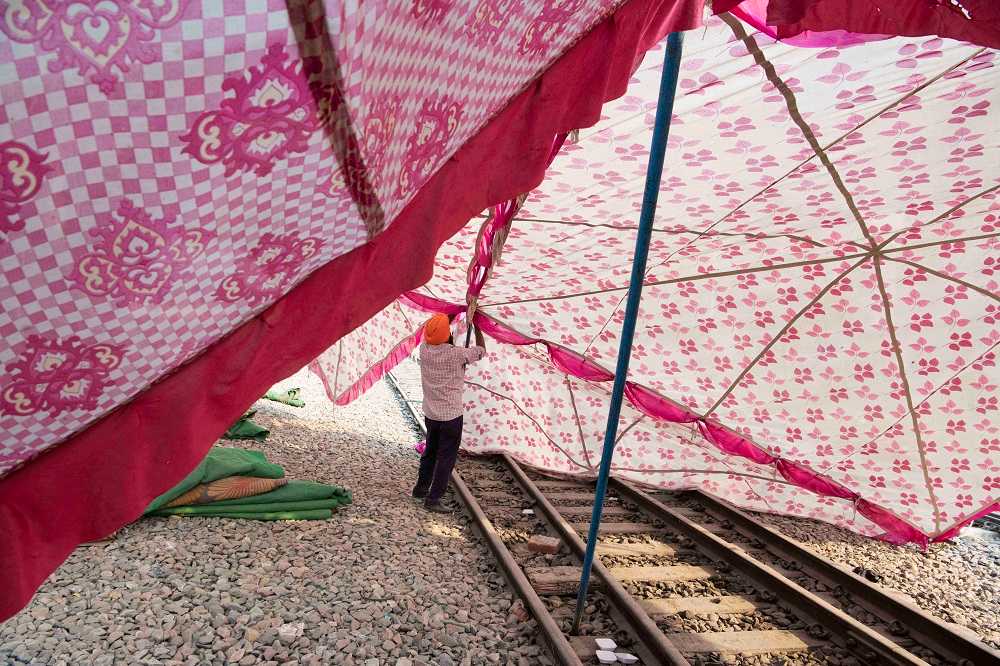 As of October 22, 2020, farmers — after an appeal from Punjab Chief Minister Captain Amarinder Singh — have temporarily allowed certain trains to pass through the state. Firozpur, Punjab. 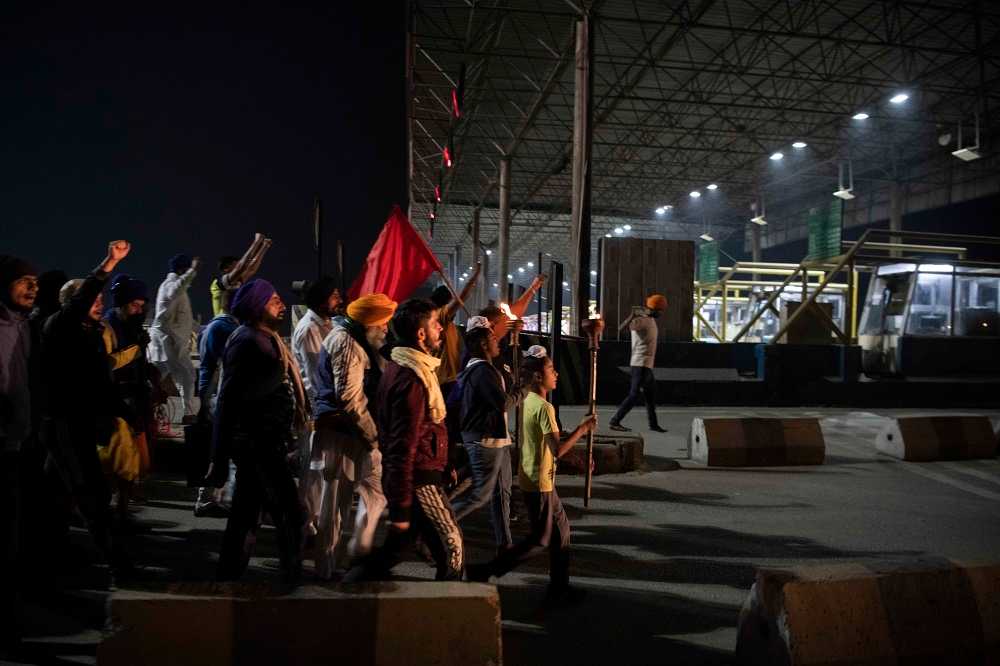 A Mashal March (torch march) at a toll plaza near Jalandhar, Punjab. Toll Plazas have been blockaded throughout the state. 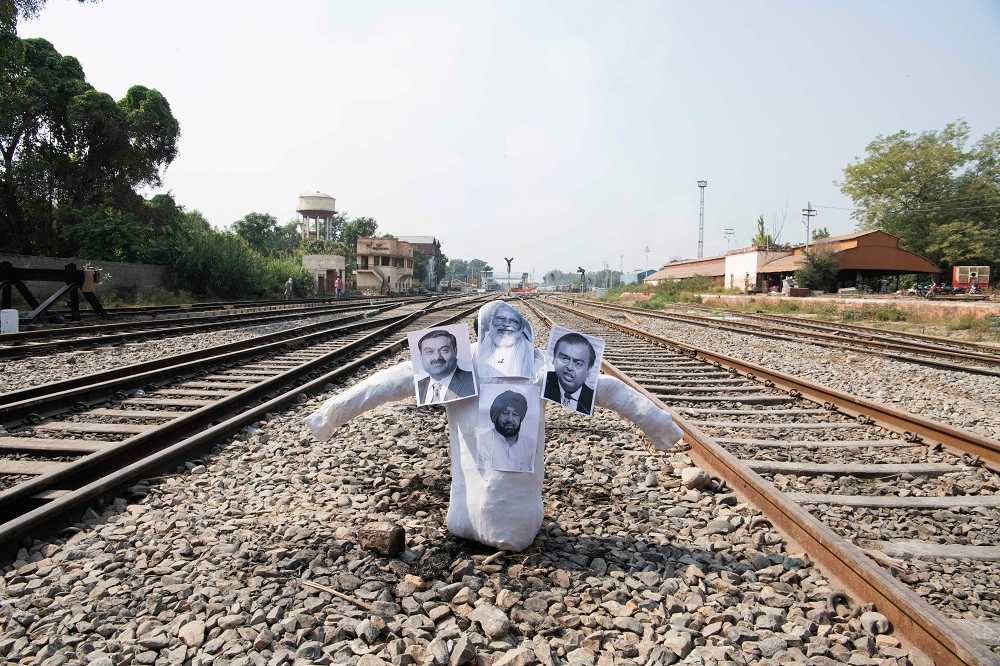 An effigy which contains photographs of (from left to right) Gautam Adani, Narendra Modi, Captain Amarinder Singh, and Mukesh Ambani at the Firozpur junction in Punjab. 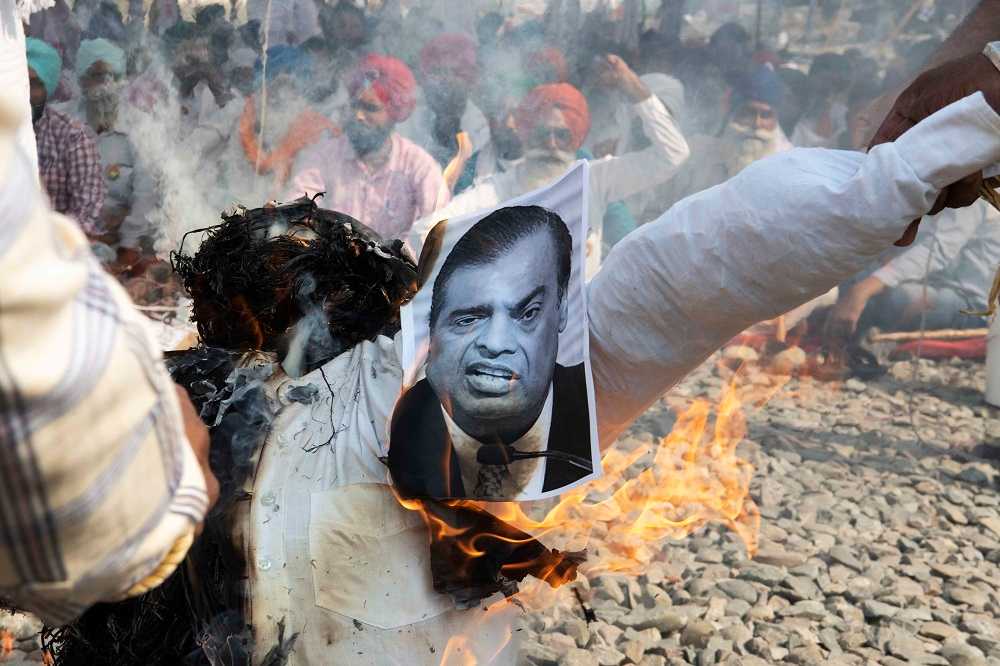 Mukesh Ambani’s effigy is burnt along with those of Gautam Adani, Narendra Modi, and Captain Amarinder Singh. Ambani and Adani are considered to be the masterminds behind the new ordinances. 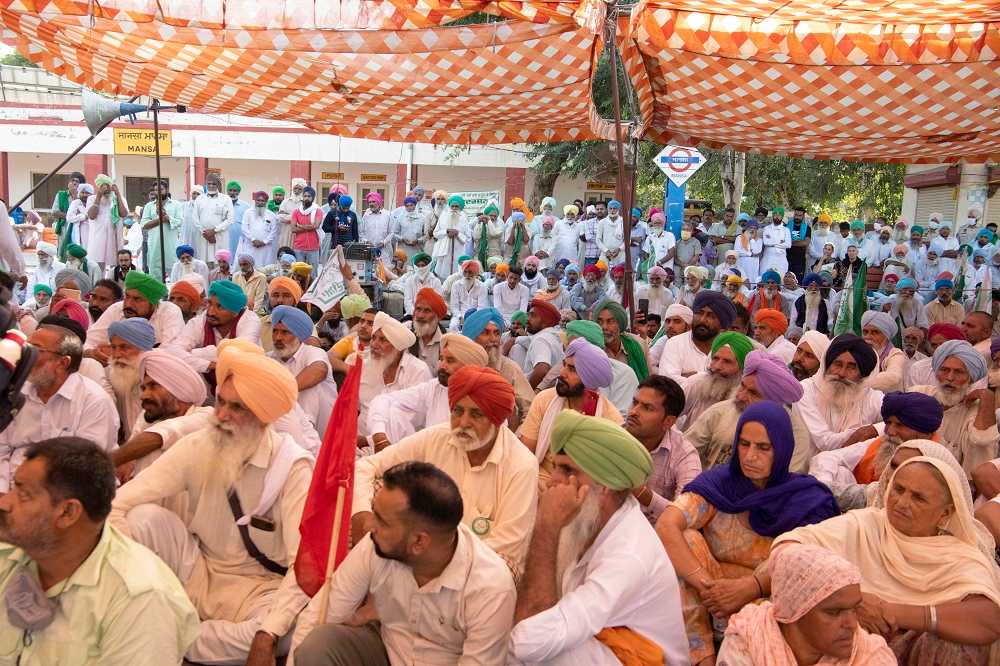 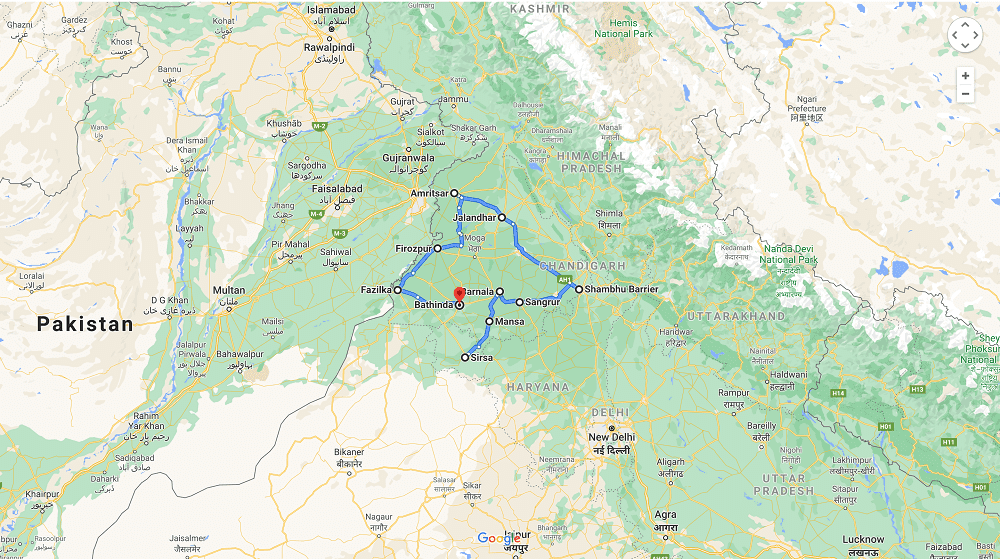 A map of my journey through the state, which started from Sirsa, Haryana, which lies on the border of Punjab.

Zimbabwe People’s Land Rights Movement (ZPLRM) is an independent civic platform that seeks to promote and protect the rights of marginalised communities to land based resources.
Housing and Land Rights