Editor's Note: Since the original publication of this article, Labour MP and Progressive International Council member John McDonnell has led a parliamentary motion to condemn the UK's role in promoting anti-labour attacks in the Ukraine.

A 2021 communication plan prepared by an international development consultancy and marked with the British Embassy in Kyiv’s logo recommends that the Ukrainian ministry should “stress” that liberalising labour laws will bring “positive results” for Ukrainian workers.

The communications strategy, which has been published by the European Federation of Public Service Unions (EPSU), includes an overview of media and leading commentators on labour liberalisation that suggests the proposed reform is out of favour with the Ukrainian public.

To promote the advantages of liberalisation, the strategy suggests that the Ministry should “make its messages easier and more emotional” to the public and encourage, via off-the-record meetings, supporters outside of government to make more “emotional” pleas to the public over liberalisation.

“The UK is effectively trying to undermine efforts of the International Labor Organization and the European Commission,” said EPSU, which claimed the UK is “financing propaganda” to “create a climate” against Ukrainian trade unions. 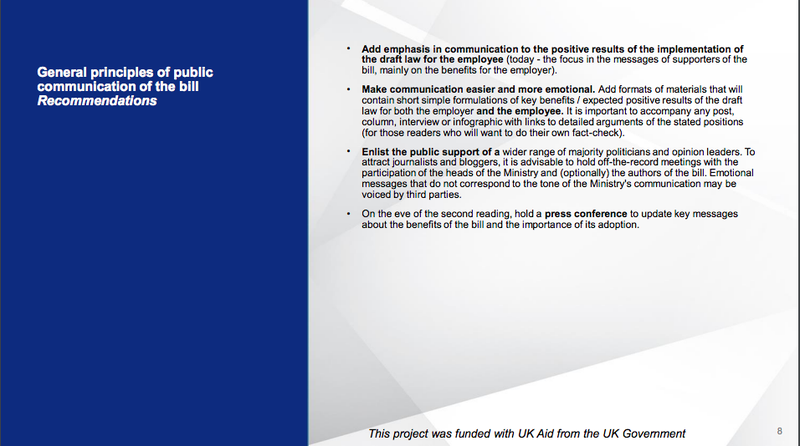 Recommendations on how the Ukrainian Ministry of Economy should communicate about labour reform | Source: EPSU

A UK government source said the Foreign Office contributes to Ukraine's labour reform process “with legal advice and technical assistance based on international best practice as well as recommendations of respected international organisations, such as the International Labour Organisation.”

In January 2020, the Ukrainian government U-turned on a drastic attempt to liberalise workplace law and remove trade union property and rights after public backlash and protests.

Now, the government has tabled two new pieces of draft legislation – draft laws 5388 and 5371 – which aim for a partial liberalisation of labour law.

Specifically, the government is seeking to simplify hiring and firing procedures, introduce individual labour contracts as the main basis of employment relations – rather than collective agreements and the country’s existing Labour Code – and give employers more powers to change working conditions.

Such measures, deputy economy minister Svitlana Hlushchenko said in September, would “guarantee honest rules in the labour market, reach a balance of interests between workers and employers, and stimulate business”.

“The over-regulation of official employment relations often leads to a situation where a significant part of them remains in the shadows,” said Hlushchenko after draft law 5388 was passed in its first reading in Parliament. The Ministry of Economy did not respond to a request for comment.

But critics, including the country’s trade unions and the International Labor Organization, a UN agency, are concerned that, if passed, these laws could severely reduce workers’ rights and will not encourage businesses to officially employ their workers.

“The reason Ukrainian employers do not officially employ people is not about formality or flexibility. It’s about saving money and taxation,” Vasyl Andreev, president of Ukraine’s construction workers union and deputy chair of the Federation of Trade Unions of Ukraine (FPU), told openDemocracy.

Andreev said that while draft law 5388, which passed its first reading in Parliament in September, was “a kind of smooth attempt to decrease union power”, draft law 5371 could place “70-80% of workers outside of Ukrainian labour law completely – including unions, regulations on working days, pay rates, as well as healthy and safe working conditions”.

George Sandul, a lawyer at the Ukrainian workers’ rights NGO, Labor Initiatives, said that the draft legislation is “absolutely illogical in Ukraine’s circumstances, and would benefit neither workers, nor business”.

“Even Ukrainian business owners do not argue in favour of simplifying hiring and firing,” he said.

Sandul called the rationale behind liberalisation – to bring people into formal employment – a “poor argument”, noting that after the Ukrainian government considerably reduced the level of employers’ social welfare contributions in 2016, there was no evidence of a substantial increase in the number of people in official employment.

“These draft laws undermine the very basics of labour guarantees that we have in Ukraine,” he said.

What will the draft legislation do?

Under draft laws 5371 and 5388, employment relations will be increasingly determined by individual contracts, with employers and employees negotiating over pay and conditions as equal sides.

The role of trade unions in regulating relations between management and workers will effectively be reduced, including the removal of a provision that management needs approval from trade unions to fire an employee.

A joint European Union-International Labor Organization project on “safe, healthy and declared work” in Ukraine responded with criticism and recommendations to these draft laws, and Ukraine’s labour liberalisation trend in general.

For example, on draft law 5371, the EU-ILO project argued that its provisions for a “parallel and less protective regime” for workers at small and medium enterprises “appears to exclude a significant share of the Ukrainian workforce” from the general Labour Code.

With introduction of “at will employment” and the possibility for employers to make unilateral changes to the “essential terms and conditions” of individual employment contracts, the project noted, 5371 could also “infringe international labour standards” and contradict “the general principles of European law and practice”.

The EU-ILO project also criticised Ukraine’s labour liberalisation trend for being “based on wrong and biased assumptions”, including the idea that “employers and workers have the same bargaining power”, and therefore there is “no need for social dialogue, collective bargaining and consultation of employers’ or workers’ representatives” in the reformed workplace.

This, the project believes, contravenes EU Directives on workplace law, labour protection provisions in Ukraine’s Association Agreement with the EU as well as ILO conventions, including its fundamental convention on the right to organise.

Since September 2020, the Foreign Office has funded a “labour regulation transformation” project in Ukraine, to help “develop legal and practical tools and strategies” towards “implement[ing] inclusive reforms to the Labour Code and related legislation”, as part of a broader military, reform and civil society support package to the country.

According to publicly available Foreign Office documents, the UK’s funding for labour deregulation in Ukraine comes via the Foreign Office’s Good Governance Fund, which supports liberalisation, rule of law, independent media and anti-corruption in eastern Europe and the western Balkans.

The communication plan is, however, marked as supported by UK Aid Direct, a £150m Foreign Office fund managed by UK development consultants Mannion Daniels, and was created by Abt Associates, a global development and research consultancy.

Abt Associates did not respond to a request for comment.

As part of this effort, UK Aid also “fund[s] organisations looking to increase and diversify income for poor communities in developing countries, as well as advocating for free and fair work conditions.”

openDemocracy asked UK Aid how deregulation of Ukraine’s labour legislation would support “free and fair work conditions” in the country, but did not receive a response.

“As with all development and aid projects, this project is going through extensive consultations with a wide-range of stakeholders, including trade unions, to ensure any recommendations are inclusive of different social groups, including women, people with disabilities, Internally Displaced Persons and veterans,” said a UK government source.

According to the authors of draft law 5388, “complicated and insufficiently clear procedures, which require time and remain exclusively formal, are a kind of ‘stop signal’ for an employer who wants to hire a worker.”

Together with the burden of HR-related documents, the authors said that current legislation is a “serious barrier to conducting employment relations in accordance with the law, and which often scares even those employers working according to the law.”

The communication plan notes that “illegal employment” in Ukraine is at a “catastrophic scale.”

“The ratio of officially employed to informally employed is 1 to 2. The labor rights of at least 10 million Ukrainians are not protected by law,” it reports.

In early 2020, the country’s Ministry of Economy attempted to push through labour law liberalisation. That draft legislation would have permitted the termination of contracts without good reason, reduced the premium for overtime pay, obliged employees to disclose any (vaguely defined) information that may impact the performance of their work, and significantly expanded the scope of zero-hours contracts.

In response, Ukrainian trade unions organised public opposition to the proposed reform, against a background of fierce online criticism and public protests – and the reform was withdrawn.

“We defeated that attempt [at liberalisation], it was an active struggle – not just in the streets, but in the media, too,” said Pavlo Prudnikov, deputy head of Ukraine’s Nuclear Power and Industry Workers Union, which is part of FPU. “We’re not used to positive coverage – trade unionists across the world are accused of supporting left-wing ideas and preventing business from developing – but the issue went viral.”

Now, however, parliamentarians and the Ministry of Economy have “changed their tactics” and “broken down the 2020 draft reform into a series of smaller draft laws”, says Prudnikov, in an effort to pass it. Along with the impact of coronavirus, this “splintering”, he says, will make it harder to mobilise against liberalisation.

“This is why we’ve shifted, to an extent, to a different form of activity: tripartite negotiations on labour reform with government, business and unions,” said Prudnikov.

Gregory Schwartz, a sociologist of work at Bristol University, concurs. “It won’t be as easy for workers to identify with the issues at stake this time around,” he said. “Unlike last year, people are not facing being left out of pensions entirely.”

For Prudnikov, though, the question over the rationale behind the proposed reform remains. “What prevents Ukrainian business and the economy from developing? First and foremost, we’re talking about corruption, unreformed courts, difficult and complex taxation, infrastructure problems,” said Prudnikov.

“But in my view, it seems it’s easier for the Ministry of Economy to rewrite labour laws than deal with those problems.”

"A decarbonized economy can be a part of a better economy, with better work and a better standard of life."
Labor

A Namibian union fighting for respect and dignitity for domestic workers.
Labor