The moral tale of household debt is repeated over and over. The crisis of 2008 was caused by too much household debt, and because lending was to the wrong people — namely poor families with low revenue and less responsibility. Banks needed to be bailed out with public money because of these excesses.

The problem with this narrative is that it's wrong. Internationally, the highest household debt was not and is not in the United States, but in northern Europe. Northern Europe felt the crisis, but not to the same extent as in the US. Why was the US more impacted? And why does the quantity of household debt differ so much across countries?

A new, international narrative is needed.

Since the financial crisis began in the United States in 2008, private debt has become an increasingly hot topic in the field of economics. According to many economists, excessive household debt was one of the main causes of the 2008 crisis, not only because people were unable to repay their debts, but also because economic activity was sucked up to repay existing debt, thereby deepening the recession.

To study the growth of indebtedness, a small but significant strand in the social policy literature investigated the relationship between credit and welfare spending. Many authors argued the rise of debt was the effect of welfare retrenchment or the lack of welfare protection. In other words, they hypothesized a trade-off between welfare and household debt. That is, in countries where the welfare state is more generous, people do not need to borrow money, while in countries with less generous welfare states, people would borrow to afford life necessities.

My research shows that both of these strands of research—that the borrowers are to blame, and that there is an inverse relationship between the robustness of a country’s welfare state and debt—are completely incorrect.

My conclusions have profound implications for our frameworks for thinking about household debt. Ultimately, it shows that we should have strong, robust, inclusive welfare systems; and if we do that, households (and their countries) have more stable financial systems, even when households take on debt.

First, my research shows that it is not necessarily the case that robust welfare systems mean lower borrowing by households. My review of the data shows that the highest private indebtedness is in the same countries where welfare spending is more generous: the Scandinavian countries. Households in Denmark, for example, have accumulated debts totaling more than three times the net disposable income of the nation (315.25%, OECD data 2014). In the United States in the same year, household debt was 114% of net disposable income.

I argue that the age of those receiving welfare matters a lot. If most welfare spending is concentrated on seniors and pensions, the young and active populations will be less confident and willing to take risks such as borrowing money. That is the case in most of continental Europe. But in states with broader protections of the active population and the youth, such as strong unemployment policies and higher education spending, people have much more confidence in the future. They have greater financial stability, which encourages risk taking such as borrowing.

It is the quality of welfare that influences the quantity of borrowing, rather than the quantity or the generosity of welfare that influences the quantity of household debt. Countries spending higher proportions of their welfare budgets to protect youth from unemployment and other risks tend to have a higher level of household indebtedness, while countries allocating most of their spending to seniors tend to have a lower level. When young people feel financially secure, they will also be less risk averse.

What is problematic is the lack of a system that bails out the people, that is, a proper welfare state. A proper welfare state should also be inclusive in order to meet its goals of creating a more stable financial environment. High debt was less of a problem for the people in Scandinavian countries, and for the nation’s economies more broadly.

If the crisis of 2008 showed us anything, it is that both politicians and market actors decided to use the real economy to save a very leveraged financial economy, while pointing fingers at (an ultimately not very leveraged) household sector. My research shows that the households were not to blame.

In part, this narrative that blames households has taken hold because of the power finance has in the system. We must shift this narrative. Once upon a time, the financial sector was used to finance the real economy and provide it capital for productive endeavors. Nowadays finance delivers growth that the real economy cannot deliver, and it has become the main center of interest for the political and business elite looking for easy financial gains. Our theoretical and political thinking should put people and the real economy first. And this cannot be done in one country. The struggle and the analysis should be internationalist at its core. Or the powerful narratives will take over, again.

Figure: Quantity of Household Debt by The Age Orientation of Welfare Spending in OECD Countries. 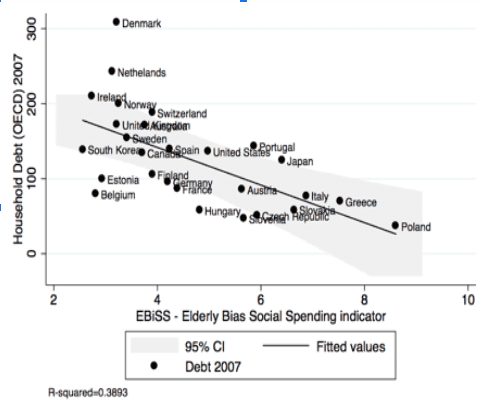 Note. The figure illustrates an inverse relationship between the elderly orientation of social spending (EBiSS, on the x axis), versus the quantity of household debt as % of net disposable income (on the y axis). The EBiSS (Vanhuysse 2014) is calculated as a rate between the social spending for the active population (at the numerator) versus spending orientated toward the elderly population (at the denominator), using data from the OECD SOCX database. A higher value on the EBiSS index means that a greater share of social spending is going to the elderly population. For example, in Poland an EBiSS of 8,6 corresponds to 37,5% of household debt as % of net disposable income. The gray area represents a confidence interval of 95%. The model suggests that the 38% of the variation in household debt levels across countries can be explained by the elderly bias orientation of welfare spending.

The IMF moves forward with its austerity and deregulation agenda for Ecuador. The next commitment for the South American country is so-called “Central Bank independence,” which would prevent its government from allocating resources to public institutions during this unprecedented economic and health crisis.
Statements
2020-07-14

The moral tale of household debt is repeated over and over. The crisis of 2008 was caused by too much household debt, and because lending was to the wrong people — namely poor families with low revenue and less responsibility. Banks needed to be bailed out with public money because of these excesses.
Support the movement
Get InvolvedMake a donation
Follow us
FacebookTwitterInstagramYoutube
Receive the Progressive International briefing
Progressive
International
Privacy PolicyManage CookiesContribution Settings
Site and identity: Common Knowledge & Robbie Blundell