NAPM: Stand with the farmers, strike in the Bharat Bandh

7th Dec 2020: National Alliance of Peoples’ Movements (NAPM) expresses its complete solidarity with ongoing farmers’ nation-wide protests and endorses the Bharat Bandh on 8th December. The call has come after several rounds of failed negotiation between the protesting farmers in Delhi and the Govt. of India, over the three Farm Acts and the Electricity Bill which together are bound to corporatize farming and makes lives of millions of farmers, especially small and marginal farmers, increasingly precarious.

Far from paying heed to the farmers’ concerns, the government has met the protestors with lathi charge, water cannons despite the cold, and trenches to stop their march. With the help of their allies in the mainstream media, politicians of the ruling party have cast aspersions on the intentions behind the protests, labelling the farmers from Punjab as ‘proponents of Khalistan and secessionists’, much like the way dissenters of all hues have been termed ‘Urban Naxals’ in an attempt to delegitimize them in the eyes of the wider public. That the vibrant protests have been thriving and surviving despite the multiple attacks of the State and fake narratives is testimony to the spirit of the farming community across India and especially the farmers from Punjab and the neighbouring states who have set-up indefinite camps in Delhi.

The agriculture sector contributes nearly 15 percent to India’s economic growth but employs about half of the country’s population. Over the last decade, the sector has witnessed a crisis of productivity, indebtedness and farmers’ suicide (501 in Punjab last year). Narendra Modi won the last elections on the promise of doubling farm income but has now promulgated a set of laws that look to strengthen corporate profits rather than farmers’ income and have in the process compromised farmers’ dignity and their rights over land and livelihood. The three contentious Acts, passed by India’s Parliament (despite questionable parliamentary processes), appear to ‘enable farmers’ to sell their produce directly to private buyers and enter into contracts with private companies. The government claims that private sector investments will stimulate growth.

Corporate led growth has, however, led to massive corporate profits and precarity for the workers in every sector, and the farming sector is unlikely to be an exception. Pointing out this likelihood, the farmers have suggested that they were free to sell their produce to private buyers even earlier. Far from enabling them to earn profits sans meditation by middlemen, the Acts put the small farmers, who till over 86% of India’s cultivated farmland, at the mercy of big corporates. These take away the minimum support prices and fertilizer subsidies, and even the legal channels of dispute settlement through regular courts. The farmers predict an increased input burden, debts, losses and increase farm suicides and displacement from land.

Though centered in Punjab and Haryana, the ongoing protests have an all-India resonance and have received widespread participation and support from farmers groups across India as well as transport employees and other workers’ unions, civil society organisations, academics, students and ordinary citizens, who would also eventually be impacted by these laws. Solidarities have been extended out of shared concerns for farmers’ rights, India’s food sovereignty and federalism as well, since the Acts look to cut out state revenues from the mandis.

Led by farmers’ unions such as Bharatiya Kisan Union (BKU) (Ekta Ugrahan), BKU (Dakounda), Kirti Kisan Union, and Punjab Kisan Union, and displaying cross-sectional solidarity, between farmers big and small, Jat and Dalit, as well as between different sections of Punjabi society, women and students in particular, the farmers’ movement has emerged as an important struggle within the spectrum of movements that are seeking a way out of the Hindutva/corporate matrix of power. The All India Kisan Sangharsh Coordination Committee, the Sanyukt Kisan Morcha and the dozens of unions in Punjab and Haryana have together ensured that these Acts receive the toughest possible challenge from farmers across India.

Precisely around this time, last year, India rose up in rage against the regressive Citizenship Amendment Act and the National Register of Citizens, with Muslim women, youth and students at hundreds of protest sites across the country leading an inspiring resistance to defend the constitution, which guarantees all citizens equal rights and dignity. The farmers' movement, this season, dovetails with the widespread people’s opposition to the pro-corporate, majoritarian and authoritarian rule of the current government. Each of these movements feeds into the larger struggle against the fascist regime which is breaking up our democracy brick-by-brick!

The way these Farm Acts and the Electricity Amendment Bill have been introduced and imposed without consultation with State Governments, in spite of the subjects being in the concurrent lists is another example, like the New Education Policy 2020, by which the Centre is striking a blow to the Federal structure of the Constitution. It is in this context:

NAPM calls upon all sections of our society to stand with the historic struggle of farmers and participate actively in the Bharat Bandh on 8th December.

NAPM commits to intensifying the struggle, along with other organizations until the core demands of repeal of the 3 Farm Acts, withdrawal of Electricity Amendment Bill and legal guarantee for Minimum Support Price to all crops are met. 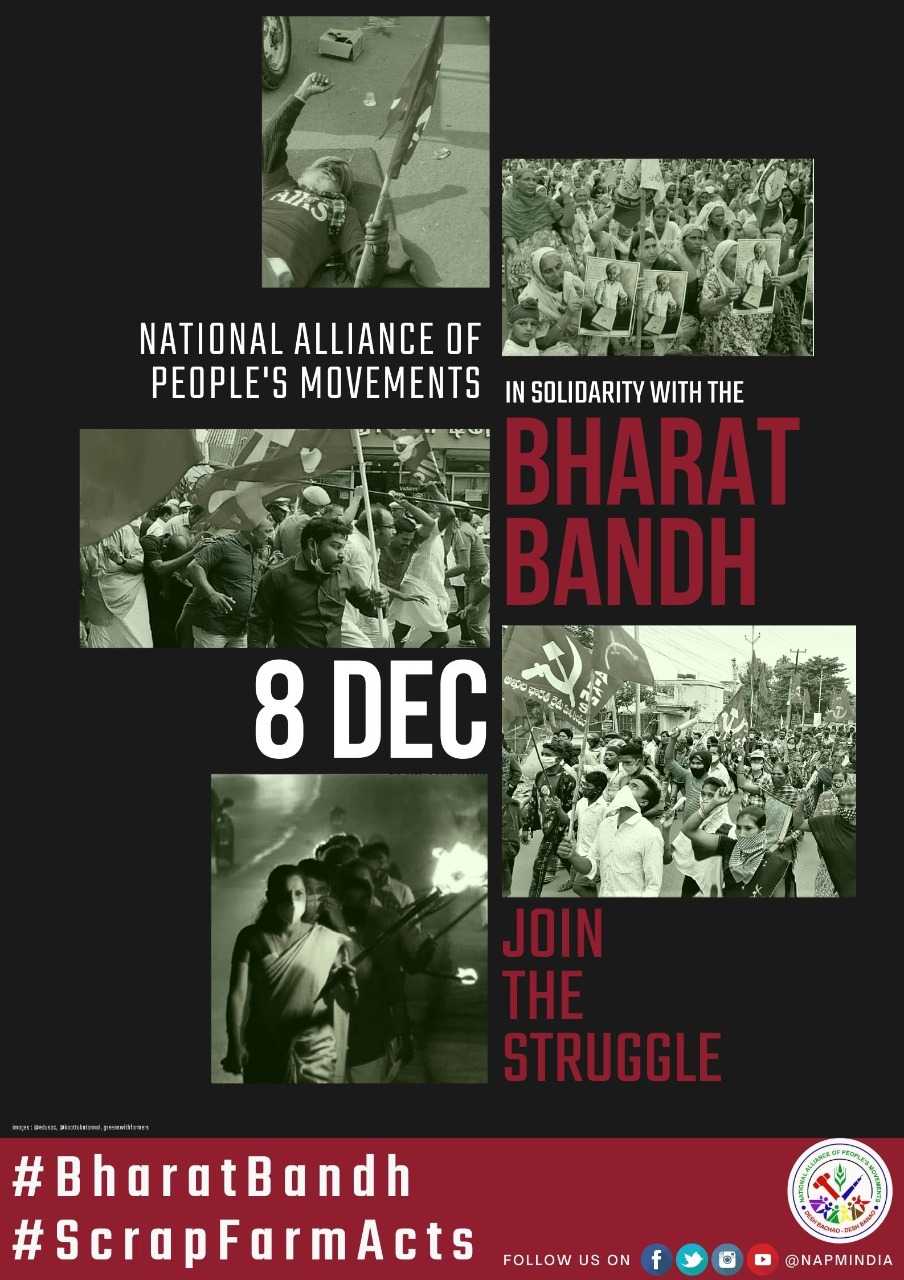 Help us build the Movement

The Movement connects, supports, and organizes progressive forces around the world.

In just a few months since launch, the Movement has published over 20 statements from our members, drawing crucial attention to uprisings in Serbia and Belarus and denouncing moves to curtail democracy in Bolivia, Ecuador, and Guatemala.

With over 40 member organizations from more than 25 countries — including trade unions, parties, alliances, and associations, collectively representing millions of people — the Movement is fast becoming a truly planetary front. This work is only possible thanks to you.

Help us build this common front. Donate to the Movement.

The moral tale of household debt is repeated over and over. The crisis of 2008 was caused by too much household debt, and because lending was to the wrong people — namely poor families with low revenue and less responsibility. Banks needed to be bailed out with public money because of these excesses.
Statements