Editor's Note: On 31 March 2021, the National Investigation Agency (NIA) — India's counter-terrorism task force — raided the houses of over 25 prominent human rights, Dalit, women and Adivasi activists in the regions of Telangana and Andhra Pradesh. The statement below, from PI Member NAPM, sets out the context behind the detentions — which are based on two first information reports (FIRs), police records of alleged criminal offences.

As Wire partner The Wire India reports (see more here), the offences referred to in the statement below include 120 B (punishment for criminal conspiracy), 121 (waging, or attempting to wage war), 121A (conspiracy to commit offences punishable by section 121), 143 (punishment for unlawful assembly), 144 (whoever, being armed with any deadly weapon, or with anything which, used as a weapon of offence), 124A (Sedition) read with 149 of the Indian Penal Code; Unlawful Activities (Prevention) Act Sections 10, 13 and 18; Andhra Pradesh Public Security Act; and Section 25 of the Arms Act. 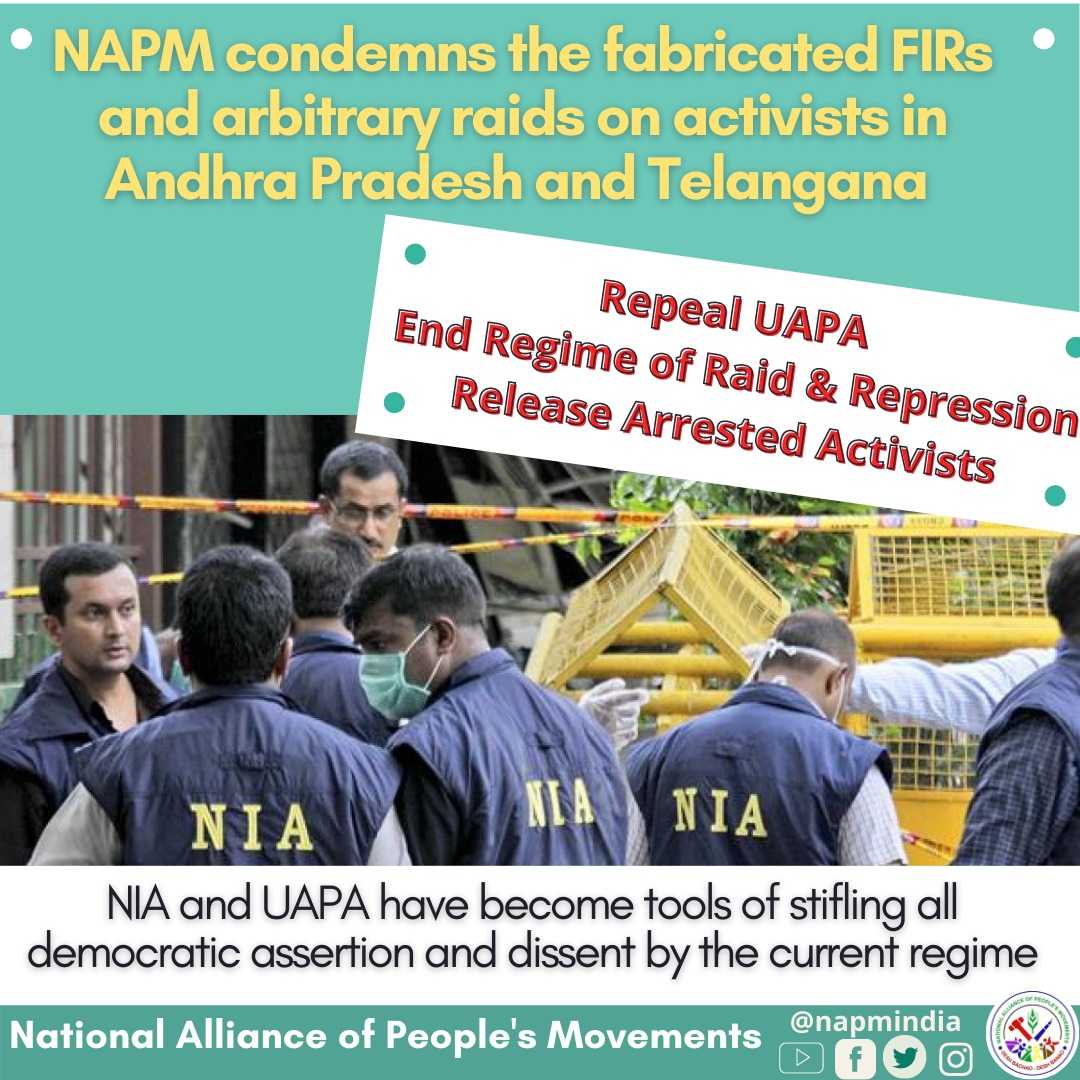 2nd April, 2020: National Alliance of People’s Movements (NAPM) condemns in the strongest possible terms the high-handed manner of ‘raids’ by the National Investigative Agency (NIA) at the homes of over 16 activists of Andhra Pradesh and Telangana, acting on dubious FIRs registered a couple of months back. We express our solidarity with all these activists and advocates who are long standing members of human rights, civil liberties and mass organizations and have been striving to work for the welfare and rights of the most disenfranchised peoples including adivasis, dalits, workers, farmers, minorities and women.

The raids on 31st March – 1st April, took place in the context of two FIRs filed by the AP police:

It is learnt that, in all, 92 persons have been accused in the aforesaid FIRs, with 27 names appearing commonly in both. Of them, 10 persons have been arrested by the AP police and have been in jail since Nov- Dec, 2020. According to information available, some of the activists, named in the two FIRs, at whose residences raids have taken place include:

After the search and seizure, which lasted for many hours and continued late into early hours of 1st April, the NIA issued notices to all of them u/s. 160 Cr.P.C. to attend its offices at Vijayawada / Hyderabad.

There are also multiple FIRs against activists and adivasis in Telangana, wherein people have been falsely implicated under draconian provisions such as UAPA. The FIR lodged at Tadvai police station in Mulug district of Telangana on 2nd November, 2020 names a long list of activists including adivasi teachers and rights defenders. In both Telugu states, human rights workers, civil liberties activists, women's rights activists, writers, academics and lawyers have been targeted for a while now. It is clear that anyone who has the capacity to highlight issues, raise public consciousness against the excesses of the State and build solidarity is facing the wrath of the Governments – both Central and state.

In line with its anti-federal approach towards all areas of governance, the Union Govt. has also sought to ‘centralize’ investigation further by roping in the NIA, even in matters where the state government can undertake investigation. As is known, most state governments (across parties) which in any case have a history of clamp-down on rights activists, are only quick to ‘hand over matters’ to the NIA, especially when they themselves are likely to face the ‘ire of the Centre’. Thus, even in the current context, the NIA Hyderabad took over the investigation of the Vishakapatnam FIR on 7th March and began inquiries at its level, based on its re-registered FIR RC-1/2021/ NIA/HYD and also obtained search warrants from the NIA Special Court.

It may also be noted that the NIA has conducted these raids, even as writ petitions are pending before the Andhra Pradesh, seeking quashing of the FIRs. Reportedly, the High Court has also granted interim protection orders to the petitioners (accused whose names appear in both FIRs) by directing the police not to arrest them, until further orders.

It is indeed a cruel irony that while the 11 adivasi women of Vakapalli (agency area in Vishakapatnam) who were reportedly subject to gang rape by the Greyhounds police in Aug, 2007 are yet to see any semblance of justice, 13 years after the incident, activists like VS Krishna who, along with many others have been at the forefront of supporting the rape survivors and ensuring state accountability are now outrageously being alleged to be ‘influencing the Vakapalli rape survivors to depose falsely against the policemen’ !

The past few years have seen a series of mass FIRs and arrests, all parroting the same narrative of certain individuals ‘conspiring against the State to de-stabilize the Govt’! Numerous activists, students, teachers, lawyers, poets have been behind bars for years now. Human rights defenders across states are being targeted, sought to be silenced by trumped up charges and FIRs. In all these matters, draconian laws like the UAPA and sedition are invoked, thereby making possible long-term incarcerations and repeated denial of bails, even to the ill and elderly persons. In effect, the ‘trial, or rather the mere allegation, becomes the punishment’.

We also wish to point out the absurdity and illegality in these FIRs of criminalizing mere possession of some literature, which is anyways in public circulation. Another ploy that the State has been resorting to is ‘confession statements’ from those in custody or arrested, to incriminate others. There is a vicious, deliberate and consistent ploy across the country today, to defame the valuable work of rights activists and groups through such sensational FIRs, raids and arrests.

By criminalizing activists, the State in effect is trying to crack down on the political work of activist organizations, be it resisting rising Hindutva and communalism, violations of adivasi and forest rights, displacement, land grab, corporate resource loot and environmental violations, caste and gender-based atrocities, exposing corrupt deals etc.

Despite limited hope from the higher judiciary in these times, we still think it is the obligation of the Apex Court to squarely address the constitutionality of institutions like the NIA and laws like UAPA and sedition that have become political tools of harassment, intimidation and incarceration of voices that stand in defence of human rights.

It needs no emphasis that human rights activists and organizations are often performing the duty that the state agencies must, by safeguarding constitutional rights. Instead, the State, by choosing to silence and pin down the very people and groups striving to defend democratic rights is making it amply clear that its only priority is serving the powerful sections, (political and corporate) violating and disenfranchising the vulnerable and marginalized.

As citizens, we need to stand up to our right to organize, dissent and question the State, without being subject to intimidation, false cases and arrests for the same.

Help us build the Movement

The Movement connects, supports, and organizes progressive forces around the world.

In just a few months since launch, the Movement has published over 20 statements from our members, drawing crucial attention to uprisings in Serbia and Belarus and denouncing moves to curtail democracy in Bolivia, Ecuador, and Guatemala.

With over 40 member organizations from more than 25 countries — including trade unions, parties, alliances, and associations, collectively representing millions of people — the Movement is fast becoming a truly planetary front. This work is only possible thanks to you.

Help us build this common front. Donate to the Movement.

The moral tale of household debt is repeated over and over. The crisis of 2008 was caused by too much household debt, and because lending was to the wrong people — namely poor families with low revenue and less responsibility. Banks needed to be bailed out with public money because of these excesses.
Statements
2020-07-14