A tsunami of debt has crashed over the world, and billions of people are drowning. This week, the G20 will meet to decide the direction of global economic recovery. Their power — and their responsibility — point in one direction: drop debt, drive investment, and deliver justice for all peoples of the world.

The pandemic has accelerated inequalities across the planet.

Workers have lost $3.7 trillion in income, while billionaires have increased their wealth by $3.9 trillion.

Wealthy countries have invested trillions of dollars to inflate their economies, while leaving informal workers, migrants, women and disabled people with pennies of support.

But poor countries have been paralyzed by a $2.5 trillion financing gap that has prevented sufficient pandemic response.

Of more than $13 trillion spent on pandemic recovery worldwide, less than one per cent has gone to the Global South.

For these countries, the pandemic has been more than a health crisis. It has been a financial crisis, too. The evacuation of capital by foreign investors, the collapse of global supply chains, and chronically underfunded public health services have combined to create a whirlwind crisis of historic proportions.

But things can get much worse. Before the pandemic, 64 lower-income countries were already spending more to service their international debts than on strengthening their local health systems. Now, the burden of their public debts has increased by around $1.9 trillion.

Public finances will determine the direction of this pandemic. While the wealthiest countries have hoarded more vaccines than they need, the fiscal straitjacket on vulnerable economies rules out the global public health effort we need to eradicate the virus everywhere.

The ability to borrow money is critical to government capacity. The domination of imperial currencies like the US dollar, however, means that governments in the Global South must borrow in a foreign currency — and these debts come with higher interest rates than those of their foreign neighbors.

Even in good times, the global economy extracts cash from the South to deliver to the North.

But when crises hit, Southern currencies lose value against the dollar at the same time that the sources of public revenue dry up. The result is a deadly trade-off. To repay debt means to slash the social safety net — a net that stands between billions of people and severe poverty. But failure to pay may be even worse: poor countries may lose their ability to borrow in the future — all but guaranteeing the disappearance of the safety net they have now.

As the major creditors to the world, the G20 governments have done little to address this deadly trade-off. In 2020, the G20 suspended only 1.66% of the total debt payments due by lower income countries. Instead, they protected the power of vulture funds and holdout creditors to collect money that is desperately needed for response, recovery and climate action.

The G20 have now offered a ‘Common Framework’ to address the emerging debt crisis. This offer is an ultimatum. Either renew the vicious cycle — of indebtedness, austerity and privatisation — or enter complete financial meltdown.

The G20 Common Framework is not a lifeline for the governments of the Global South. It is their debtors’ prison.

This document is a call to break with this system of neo-colonial exploitation — and an analysis of the G20 obligations to initiate a just debt workout system that:

In this briefing, we walk through each of these demands, why we believe they are essential to a vision of debt justice, and why the G20 must act now to deliver it.

The last decade has seen a huge diversification in creditors, including finance and fossil fuel giants like BlackRock and Glencore. In the last ten years alone, private creditors have doubled their share of lower income government debt. Composition of debt varies widely across countries for example the majority of Zambia and Mozambique’s debt is private-owned, while multilateral creditors own most of Nepal and Sierra Leone’s debt.

But the G20 ignores these critical facts, and brings only bilateral creditors to the table. They suggest — laughably — that private creditors volunteer to participate. This means that funds freed from repayment to bilateral creditors are simply redirected into the pockets of predatory private lenders. Last year, low income countries that qualified for the G20’s debt suspension were still paying $32 million every day to banks and investment funds. A scenario where public money props up the profiteering practices of financial speculators is unjust at any time, never mind during a global crisis.

By letting private and multilateral creditors off the hook, the G20 is enabling a culture of impunity and incentivizing the reckless lending that has led to this crisis. We need a mechanism that compels every creditor to participate.

Life-threatening sovereign debt is not confined to the poorest countries. The fallout of the pandemic has, for example, devastated regions dependent on global flows like remittances, commodity exports and tourism.

The existing system of ‘debt relief’ has left these countries in the lurch. The G20 offer is limited to the poorest countries, excluding many middle income and small island states that are in greatest danger of being engulfed by debt.

The G20 system of debt relief serves creditors who give feeble concessions for ‘cheaper’ countries, while leaving others to descend deeper into crisis.

A debt workout process must be available to any country that asks for it. This puts the decision of renegotiation in the hands of governments of affected countries, rather than arbitrary cutoffs driven by the cost minimisation interests of powerful creditors.

There is no multilateral mechanism for resolving sovereign debt problems. The result is an ad hoc approach with a strong bias against borrowers.

The G20 expect indebted governments to seek relief from other creditors individually, one-by-one. This encourages creditors to withhold relief and sabotage restructurings in the hope that others will take the bigger haircuts.

This system is particularly benevolent to private creditors, whose debt is protected by secrecy and complexity, granting them enormous power over debtor countries and other creditors.

Governments who have attempted to restructure have been disciplined with credit downgrades by Credit Rating Agencies that are both player and umpire in global markets. The result is the deterioration of access and conditions of sovereign debt.

At the same time, creditor rights are stronger than ever, with new opportunities for vulture funds to buy defaulted bonds, aggressively pursue litigation and drive up the value of claims through penalty interest clauses and court judgments.

This fragmented and opaque state of affairs is by and for the creditors.

We demand a truly multilateral and transparent framework for workouts and future lending that is accountable to citizens in debtor countries and rewards rather than punishes states that take positive steps towards debt sustainability.

The IMF and World Bank Debt Sustainability Framework (DSF) is the basis for the G20 debt relief packages.

However, these assessments fail to account for basic rights, development prospects, and climate action. Their objective is instead to assess how expenditure can be adjusted in order to satisfy debt payments. Unsustainable levels of debt servicing are therefore maintained at the expense of crucial public spending.

The IMF has announced a review of the DSF, but the process will take place completely outside of public view, deepening its crisis of accountability.

The evidence that is used to determine the debt workout process should not be led by large creditors. Instead, the G20 must guarantee independent debt assessments that provide an impartial basis for negotiations and a clear focus on rights, development, and the climate.

Restructuring debt is not enough. UNCTAD has estimated that governments need debt cancellation to the order of $1 trillion to achieve basic sustainability — let alone social justice.

The G20 is resisting this inevitable measure to their own detriment.

Their offer is instead to push the numbers around: a change of payment terms and new borrowing mechanisms.

This might make some quick cash available in the short term. But in the long term, it simply delays the repayment with no strategy to resolve the underlying crisis of insolvency. In the meantime, collateral damage to lives, livelihoods and the planet will be irreversible.

Debt cancellation must be on the table.

There is a new economic consensus to support public investment as a vehicle for pandemic recovery.

But highly indebted countries are still facing another decade of austerity.

While the IMF has aggressively advocated for an expansionary response in wealthy countries, they have continued to advance an agenda of austerity and regressive taxation on low income countries.

The head of the World Bank has even recognised the toxic rent-extraction by global credits on the poor. Yet he has not suspended or cancelled any of the debt that they own. Instead, he has continued to prioritise private over public interests.

Austerity is responsible for uncountable loss of life. It is illogical and cruel to recognise the role of austerity in creating this crisis and prescribe it once again.

Debt workouts should return sovereignty to citizens. The G20 must ensure countries are not coerced into austerity conditionalities in return for access to relief.

Invest in a common recovery

Debt cancellation is one thing. Investing in the future is another.

All governments must have the budget to deliver a green and just transition.

Poor countries have been held back for decades by an extractive global economic architecture. Now, it is time to turn on the taps and invest.

Immediate actions will include a Special Drawing Rights allocation, boosting Multilateral Development Bank financing, and meeting shortfalls in financing for the loss and damage inflicted on low income countries by climate breakdown.

Reigning in tax avoidance from multinationals and wealthy individuals would redirect resources to public budgets and could be accompanied by new global tax levers such as minimum corporate tax, digital tax, financial transaction tax, and wealth tax.

Incentives for fossil fuel exploitation and other carbon-intensive industries must be scrapped, and subsidies redirected to energy transitions and green industrial strategies that create waves of unionised, decent work.

The world is not suffering from a lack of resource. We suffer because gargantuan amounts of cash are sucked into the pockets of the few. There is no shortage of ideas of the many courses of action we can pursue to reverse this flow. What we need now is the political will, and we won’t stop until we get it. 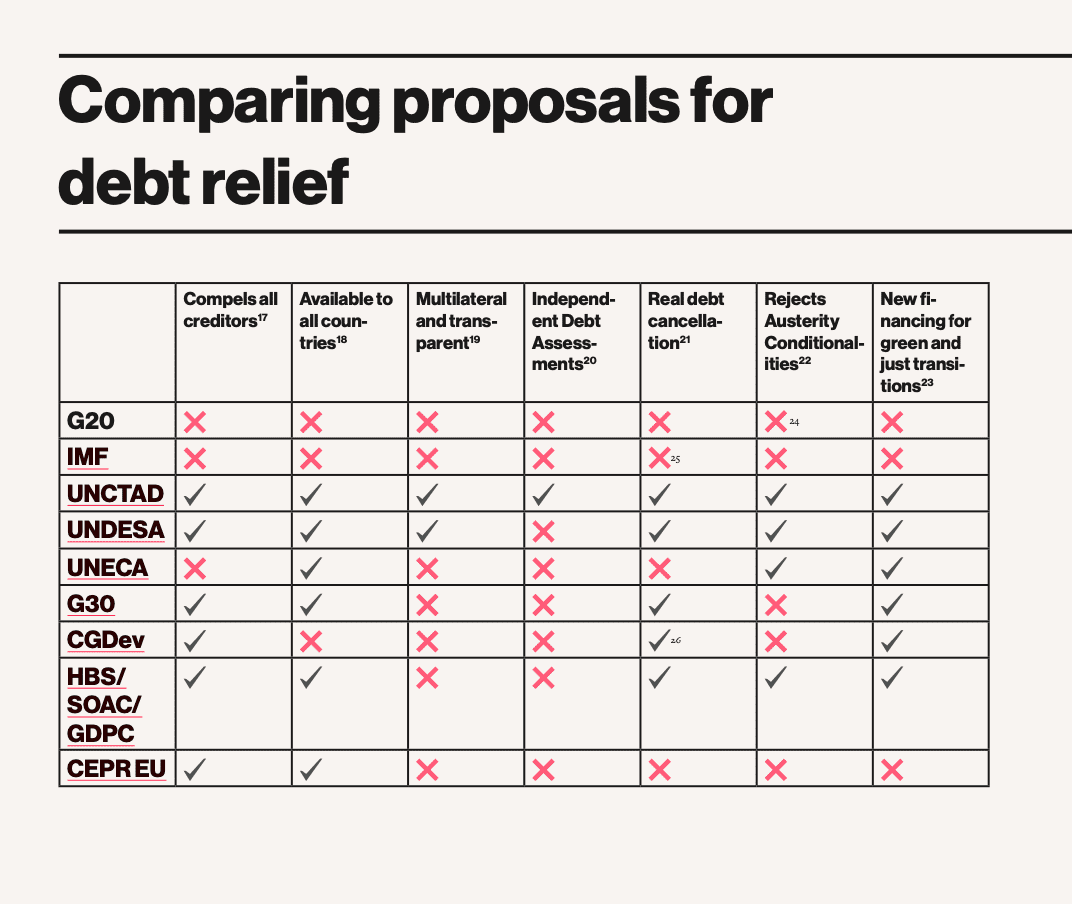