A new poll finds that 60% of US voters want President Joe Biden to endorse the motion by more than 100 lower- and middle-income countries to temporarily waive patent protections on Covid-19 vaccines at the World Trade Organization. Only 28% disagreed.

The survey, carried out by Data for Progress and the Progressive International, shows a super majority of 72% registered Democrats want Biden to temporarily waive patent barriers to speed vaccine roll out and reduce costs for developing nations. Even registered Republicans support the action by margin of 50% in favor to 36% opposed.

The new polling shows that “there is a popular mandate from the US American people to put human life and economic recovery ahead of corporate profits and a broken intellectual property system,” said David Adler, the general coordinator of the Progressive International. Burcu Kilic, research director of the access to medicines program at Public Citizen and member of Progressive International’s Council, called on Biden to “listen to Americans who put him in power” and “do the right thing.” 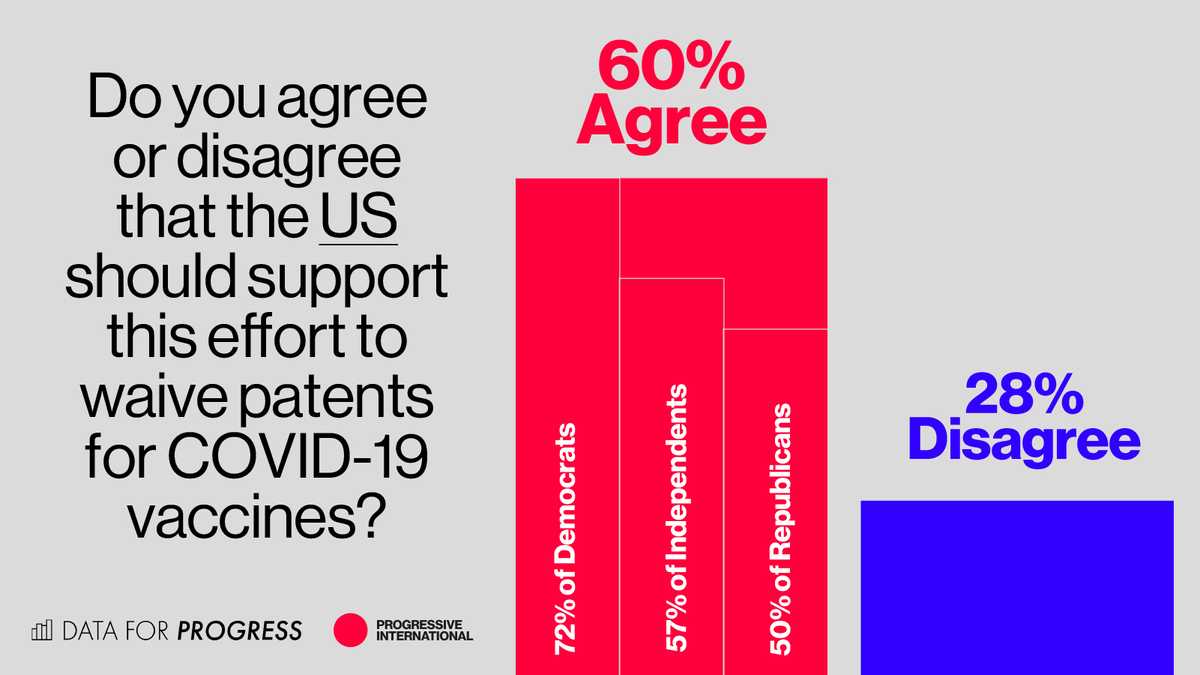 Due to WTO intellectual property rules, countries are barred from producing the current leading approved vaccines, including US-produced Moderna, Pfizer and Johnson & Johnson. In October of 2020, South Africa and India presented the WTO with a proposal to temporarily waive these rules for the duration of the pandemic so that vaccines can be manufactured across different countries, increasing their availability, reducing their cost and ensuring that they are delivered to everyone on earth as quickly as possible.

In the absence of the waiver, the current manufacturing and distribution rates are unlikely to stem the pandemic’s momentum, especially as new variants, which are more infectious and seem to evade the acquired immunity from prior infection or from the current vaccines, continue to emerge. The US under President Trump joined other richer nations to block them.

The shock poll reveals a level of public support for intellectual property waivers that will likely add to growing congressional pressure on Biden to join those pushing to save lives through a global vaccination drive. Congresswoman Jan Schakowsky is working on a letter to the president to which Schakowsky says more than 60 lawmakers have added their signature, including House Speaker Nancy Pelosi.

Senator Bernie Sanders, Chair of the Senate Budget Committee, responded to the poll saying the US should be “leading the global effort to end the coronavirus pandemic.” According to Sanders, “a temporary WTO waiver, which would enable the transfer of vaccine technologies to poorer countries, is a good way to do that.”

Responding to the new poll, Representative Ilhan Omar called on Biden to “support a waiver to boost the production of vaccines, treatment and tests worldwide,” arguing that it was “not just an issue of basic morality, but of public health.”

Adler argues, “US Americans know rigged rules to prop up big pharma’s profits are not in their interest. The longer the virus has to spread, the more it can mutate and become vaccine-resistant. Covid-19 anywhere is a threat to public health and economic wellbeing everywhere. If intellectual property restrictions are not lifted, the pandemic will go on for longer, killing more people and damaging more livelihoods.”

The threat to the Global South from vaccine apartheid is a “death sentence for millions around the world—and it is because giant pharmaceutical corporations would rather maximize profit than provide vaccines to people who need it,” according to Omar.

Sanders agrees, saying “the bottom line is, the faster we help vaccinate the global population, the safer we will all be. That should be our number one priority, not maximizing the profits of pharmaceutical companies and their shareholders.”

As if the despair of confinement, concern about new infections, and mourning for those who have left us because of the pandemic were not enough, we are also forced to deal with profound outrage at one of capitalism's most inhumane anti-values: turning life and health into business.
Health
2020-12-08

On October 15 2020, members of Covid-19 Response Working Group wrote the following letter to the WTO calling on all member countries to put "people first" in the pandemic response.
Health
2021-03-10

All Health Is Public Health

For decades, we have been sold a myth of private health. It is a myth that our health is largely a product of individual choices and personal responsibilities. It is a myth that our healthcare is a service which private corporations can provide, and for which we must pay to survive.
Support the movement
Become a memberMake a donation
Follow us
FacebookTwitterInstagramYoutube
Receive the Progressive International briefing
Progressive
International
Privacy PolicyManage CookiesContribution Settings
Site and identity: Common Knowledge & Robbie Blundell